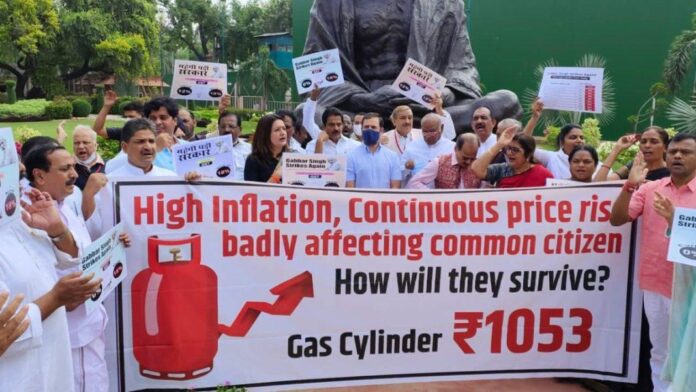 New Delhi [India]: Congress leader Rahul Gandhi on Tuesday joined the opposition protest against inflation and 5 per cent goods and service tax (GST) price on essential items, in front of the Gandhi statue in Parliament, on the second day of the Monsoon session.

Speaking on the protest, Mallikarjun Kharge said that they will fight against price rise, inflation and GST rate hike of some essential commodities.

“Today, opposition parties have come together to protest against price rise, inflation and GST rate hike of some essential commodities. We will fight against this,” he said at Parliament.

Rajya Sabha MP Jairam Ramesh said, “Today, 53 years ago, banks were nationalised. It was a transformational change. Now, Modi Sarkar is on a privatisation spree. Public sector banks must be equipped to face competition, but selling them off to a chosen few will be disastrous! Congress will oppose the Bank Sale Bill.”

Meanwhile, Prime Minister Narendra Modi on Tuesday is discussing the government’s strategy in Parliament with his top ministers, for the ongoing Monsoon session.

In the Lok Sabha, Congress MP Manickam Tagore filed an adjournment motion notice on imposition of 5 per cent GST on some items.

Opposition leaders said they will keep up the pressure on the government on these issues.
Both the Houses on the first day of the monsoon session of Parliament was adjourned for a day amid disruptions by the opposition over the issue of price rise.

The recommendations on Goods and Services Tax rates that were made during the 47th GST Council meeting held in June came into effect from Monday.