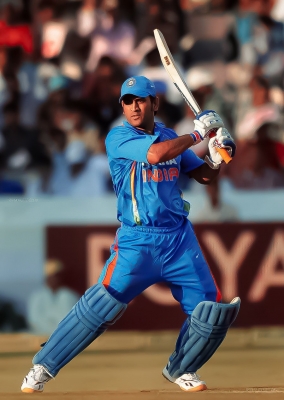 Former India opener Virender Sehwag extended wishes to Dhoni. “Till the time full stop doesn’t come, a sentence isn’t completed. Till the time Dhoni is at the crease, the match isn’t completed. Not all teams have the fortune to have a person like Dhoni, Happy B’day to a gem of a person & player, MS Dhoni. Om Helicopteraya Namaha,” he tweeted.

“An idol & an inspiration Here’s wishing @msdhoni – former #TeamIndia Captain & one of the finest to have ever graced the game – a very happy birthday,” said the Board of Control for Cricket in India.

“Dada taught us youngsters how to win and Dhoni made it into a habit. Two great leaders from different eras born just a day apart. Happy birthday to the men who shaped Indian cricket,” Mohammad Kaif tweeted.

“Happy Birthday to my big brother. Thank you for being my biggest supporter and mentor in every phase of life, may god bless you and your family with good health always. Much love to you mahi bhai. Wishing you a great year ahead! @msdhoni #HappyBirthdayDhoni,” Suresh Raina shared a heartfelt message on Twitter.

“Happy birthday to the man whose understanding of the game and ways to tackle challenges is unmatched. Your ingrained confidence and attitude to lead from the front made us believe that #TeamIndia can win any game. Wishing you good health and happiness @msdhoni,” Jay Shah, Secretary of the Board of Control for Cricket in India, tweeted.

MS Dhoni needs no introduction in the world of cricket and is famous for his calm and stunning captaincy skills on the field in his international and IPL days.