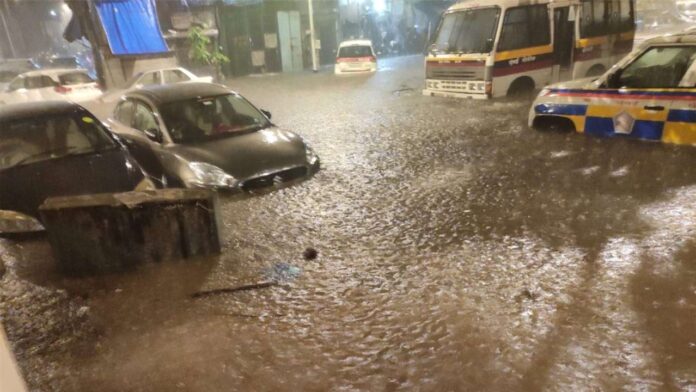 The Andheri subway also continues to remain submerged under the rainwaters.

The Regional Meteorological Center of Mumbai on Wednesday predicted that moderate to heavy rain is likely to occur in the city and suburbs for the next 24 hours.

It further predicted the possibility of very heavy rainfall is likely to occur in isolated places for the next 48 hours.

On Tuesday, heavy rains lashed Mumbai and its suburbs amid an ‘orange’ alert issued by the India Meteorological Department (IMD). Several parts of Mumbai have been affected by waterlogging, including the Andheri subway and Bhoiwada, leading to traffic snarls in the city.

Hindamata junction in the city’s Southbound has reported 0.5 feet of water being logged.
The administration has, however, requested the commuters to plan their travel accordingly, as the traffic from Milan Subway and Andheri Subway has been diverted to S.V. Road and D.N Nagar Chowki after the former experienced the logging of water to heights up to 2 feet.

The heavy rainfall in the Gadchiroli district of Maharashtra, during the past few days, has resulted in waterlogging and incessant downpours that have created a flood-like situation.
According to the Maharashtra SDMD report on Sunday, a total of 76 people have died (till July 10) since June 1 and as many as 838 houses were damaged due to the rain-related incidents in the state.

“At least 4,916 people have been shifted to safer locations, and 35 relief camps were set up by the disaster management department and rehabilitation department,” it said.

The SDMD said 125 animals have also lost their lives in rain/flood-related incidents in Maharashtra since June 1.