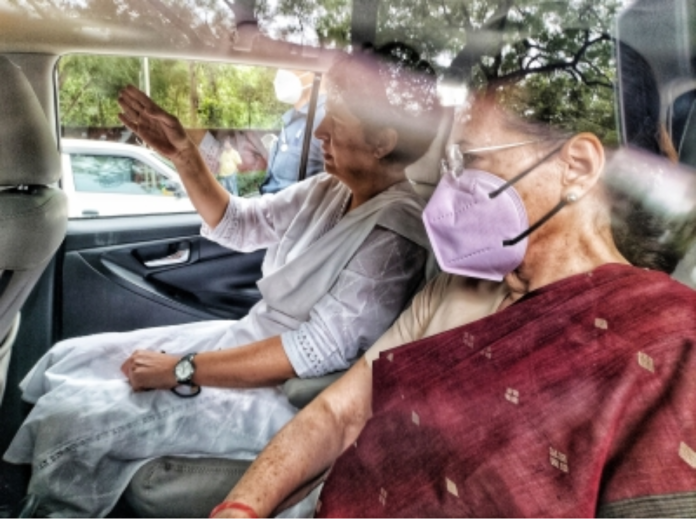 New Delhi [India]: A day after the Enforcement Directorate questioned Congress President Sonia Gandhi for over six hours on the second day of her appearance in connection with a money laundering case linked to the National Herald newspaper, the 75-year-old has been asked to appear again on Wednesday, officials said.

She left the agency’s office in central Delhi just before 7 pm on Tuesday after recording her statement. Sonia Gandhi reached the ED office on Tuesday morning with her armed security cover, accompanied by Rahul Gandhi and Priyanka Gandhi Vadra. As Rahul Gandhi left for the protest, Priyanka Gandhi stayed back at the agency’s office. Officials said that on Tuesday, Sonia Gandhi’s response was sought to around 30 questions regarding her involvement with the National Herald newspaper and Young Indian Pvt Ltd, the company under investigation.

Her questioning at the ED office in central Delhi went on for nearly 2.5 hours beginning at 11 am and continuing after a 90-minute lunch break until 7 pm. Her questioning was conducted by a team led by additional director Monika Sharma.

During her questioning on Tuesday, the Lok Sabha MP from Rae Bareli was asked about the functioning and running of the newspaper, the role of its various office bearers, and her and Rahul Gandhi’s involvement in the affairs of the National Herald and Young Indian.
Officials said the agency would also confirm her statement with that of Rahul Gan

Condemning the agency’s action, Congress called it a “political vendetta”. The Delhi Police made a massive deployment and cordoned off the lane from Sonia Gandhi’s residence to the ED office to prevent a law and order situation. Restrictions were imposed on the movement of traffic in the area.

Rahul Gandhi and Congress MPs gathered at the Vijay Chowk to march to the Rashtrapati Bhavan to draw the President’s attention to the alleged misuse of central agencies by the government when they were stopped by the police.

“I am not going anywhere. We wanted to go towards the President’s house. But the police are not allowing us,” Rahul Gandhi had said.

The Delhi Police and personnel of the security forces were caught on camera, manhandling Congress workers and leaders.

Srinivas BV, the national president of the Youth Congress, was seen being pulled out of his car by the Delhi Police, who tugged at his hair in gruesome visuals from the Congress’s protest in the national capital. The police were seen pushing and shoving the leader inside their car as he tried to speak to the media gathered there.

“Mujhe maar kyun rahe ho (Why are you hitting me?),” the leader is seen screaming at the police, who later try to calm him, saying, “Koi nahi marega (no one will hit you).”
The video also showed a few Rapid Action Force personnel pressing the car door shut as Srinivas attempted to climb out.