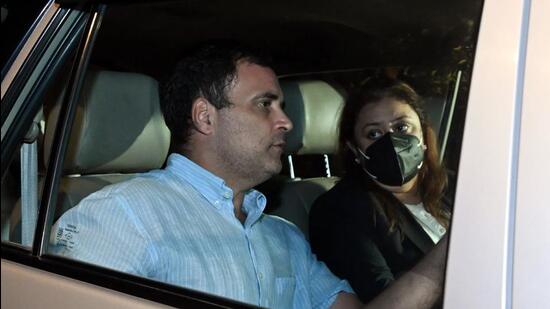 New Delhi [India]: As Congress leader Rahul Gandhi is scheduled to appear before the Enforcement Directorate (ED) on Monday for the fourth round of questioning in a money laundering case linked to the National Herald case, his party will hold a peaceful protest across the country against the central government’s “vendetta politics”.

The Wayanad MP was questioned by ED from June 13 to 15 amid intense protests from party leaders and workers. Notably, the ED had asked Gandhi to appear again on Friday (June 17), but he requested the officials to exempt him from appearing tomorrow and urged for a new date on Monday (June 20).

Later, ED issued fresh summons to Rahul Gandhi to join the investigation on Monday, granting his request to the agency to consider deferring his questioning from June 17 to June 20 citing his mother and party interim president Sonia Gandhi’s health condition.

Regarding his questioning by ED on Monday, as per official sources, the Congress leader, a Z+ category protectee of the Central Reserve Police Force after the Union government withdrew the Gandhi family’s Special Protection Group cover in 2019, was confronted with several documents collated by the ED as evidence recovered so far in the case to get his version.

Congress will hold peaceful protests across the country on Monday against the Agnipath recruitment scheme.
Taking to Twitter, Congress General Secretary in-charge Communications Jairam Ramesh said on Sunday, “Tomorrow lakhs of Congress workers across the country will continue peaceful protests against the anti-youth Agnipath scheme and against Modi government’s vendetta politics targeting its MP Rahul Gandhi. A Congress delegation will also meet Honble Rashtrapati in the evening.”

A delegation of Congress leaders will also meet President Ram Nath Kovind today and submit a memorandum on the issue of entry of Delhi Police into their party headquarters and the alleged misbehaviour with party MPs during protests.

Earlier, Rahul Gandhi was questioned in detail about the ownership of Young Indian Private Limited (YIL) by the Gandhi family and its shareholding pattern in Associated Journals Limited (AJL), the company that runs the National Herald newspaper, said sources.

Investigators in the ED, sources said, had also asked Rahul Gandhi to describe the circumstances under which AJL was acquired by YIL in 2010, making it the owner of all assets owned by the National Herald newspaper.

The National Herald, started by India’s first Prime Minister Jawaharlal Nehru, was published by the AJL. In 2010, the AJL, which faced financial difficulties, was taken over by a newly-floated YIL with Suman Dubey and Sam Pitroda as directors, both of them Gandhi loyalists.
In a complaint in the Delhi High Court, Bharatiya Janata Party leader Subramanian Swamy accused Sonia Gandhi and her son, Rahul Gandhi, and others of conspiring to cheat and misappropriate funds.

Officials familiar with the probe said Rahul Gandhi is being asked questions about the takeover of the AJL by YIL since the Gandhis have stakes in the latter. The Congress leader is being questioned under criminal sections of the Prevention of Money Laundering Act (PMLA).