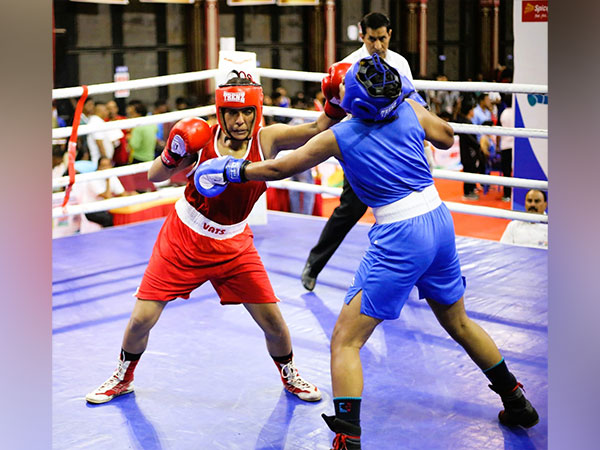 Haryana’s women’s team and Services Sports Control Boards’ (SSCB) men’s team continued their good show with 11 boxers from each making their way into the finals of the tournament. Devika Ghorpade (52kg) extended her fine form and started the proceedings for Maharashtra on a great note as she began the bout against Punjab’s Kuldeep Kaur with positive intent. Devika’s relentless attack forced the referee to stop the contest in the second round and give the result in her favour. She will fight against Haryana’s Anjali in the final.

In the 57kg featherweight category, Aarya Bartakke got the better of Rajasthan’s Anju in a thrilling contest. Both the boxers threw caution to the wind and traded heavy blows throughout the bout but Aarya showcased great composure and skills to prevail over her opponent by a 4-1 split verdict. She will face Mizoram’s Naom Chingsanuami in the summit clash.

Sharvari Kalyankar (75kg), Nasweera Mujawar (81kg) and Kanchan Suranse (81+kg) were the other women boxers from Maharashtra to enter the final. They will face Haryana’s Muskan, Pranjal and Kirti respectively in their gold medal matches.

In the men’s section, Maharashtra’s Abhiwardhan (92kg) blanked Rishabh Pandey of Uttar Pradesh 5-0 in a one-sided affair. He will square off against Asian junior champion Bharat Joon of Haryana in the final.

The other male boxer from Maharashtra to reach the final was Usman Ansari (51kg), who defeated Uttarakhand’s Vishwas Mehra 5-0. He will take on SSCB’s Jadumani Mandengbam in the final.

Delhi’s Sanjana (48kg) and Shivani (70kg) also progressed into the finals after getting the better of Himachal Pradesh’s Priya and Rajasthan’s Sanjana respectively by an identical 5-0 margin.

Punjab’s Tejaswi Vashisht also emerged victorious on the fifth day of the competition as he defeated Ayush Yadav of Manipur in a 4-1 split verdict in the men’s 75kg semi-finals.

Sharath Kamal, Nikhat To Be India’s Flag-bearers In Closing Ceremony