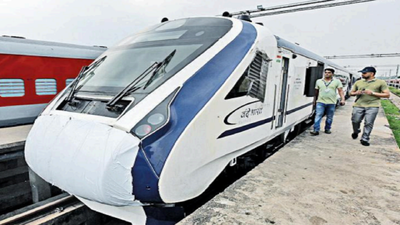 The trial run of this new train at a speed of 110 kmph is likely to start on August 24.

This trial run will be conducted in the 100 km Chandigarh New Moranda-Sanewal railway section.

After all the technical tests, the train will be tested at a speed of 110 kmph. Railway Minister Ashwini Vaishnaw will be present in the train during the commencement of the first trial run of 110 km.

After the successful trial run of 110 km, the trial run of the second phase of this new train will start on August 29.

This trial run will be done in a 225 km section between Kota and Nagda railway station, on which the train will be run at its maximum speed of 180 kmph.

According to Railways, after the completion of the trial run of 50,000 km, its report will be sent to the Railway Safety Commissioner.

Following the green signal from the Safety Commissioner, the new Vande Bharat Express train will start running on another new route.

However, the decision on this is yet to be taken. Sources said the new train can be run between Ahmedabad and Mumbai.

It is notable that this is a part of Prime Minister Narendra Modi’s announcement on Independence Day last year that 75 new Vande Bharat trains would come upon the occasion of the completion of the country’s 75 years of independence, connecting 75 big towns across the country.

The Railway Ministry prepared a plan for the accomplishment of the target and handed over the responsibility to Integral Coach Factory (ICF), Chennai. Interestingly, the upcoming Vande Bharat trains are being promised to be more advanced than the two already operational.

According to sources, the new trains will have automatic fire sensors, CCTV cameras and GPS systems to make travelling safer and more comfortable.

The higher speed of these trains are up to 180 Km/hour. ICF has set a target of manufacturing 75 Vande Bharat trains by August 2023.

Travelling in the new trains would be more comfortable because of the lighter coaches than the previous trains.

The coaches are made of stainless steel. Due to less weight, the passengers would feel extra comfortable even at high speed.

Also, there are automatic gates operated by the pilot. The windows are wide, there is more space for the luggage. The toilet installed will be advanced. Most of the parts of the trains are “Made in India” except for a few small parts, said sources.

For the safety of the passengers, ‘Kavach’ technology is being installed in all new trains, so that automatic breaks could be applied in case any train is coming on the same track.

The test speed of the train is 180 kmph, while the maximum speed is 160 kmph.

The two Vande Bharat trains which are operational are in between New Delhi-Varanasi and New Delhi-Vaishnodevi Katra.