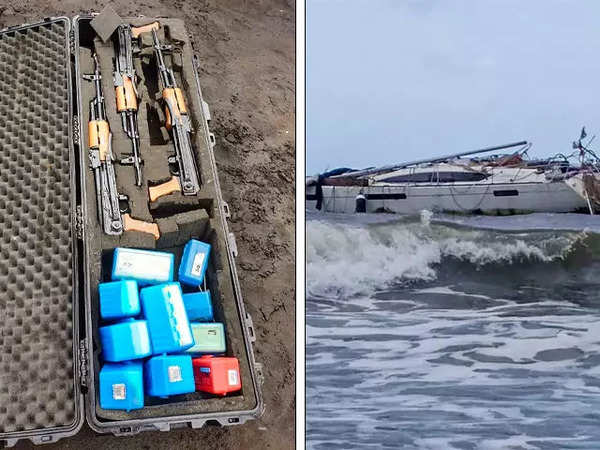 Mumbai (Maharashtra): Soon after a mysterious boat loaded with weapons was recovered near the Harihareshwar beach, Maharashtra Deputy Chief Minister Devendra Fadnavis on Thursday said that there is “no confirmation of any terror angle” into the incident, while also stating that the government is not ruling out anything and investigation is underway to probe all aspects.

Security was tightened in the Raigad region of Maharashtra after the recovery of a mysterious boat loaded with weapons near the Harihareshwar beach on Thursday.

This comes a day ahead of the celebration of the Dahi Handi festival in the state.

“There is no confirmation of any terror angle. The boat has just drifted here. We are not ruling out anything, investigating all aspects. Police have been asked to be on high alert,” said Fadnavis.

“Some details cannot be revealed as it may spread an atmosphere of fear,” he added.
The Deputy Chief Minister informed that three AK-47 rifles were found on the boat which came towards the Kokan coast “due to high tide”.

The Central agencies have been informed about the developments.

“No possibilities of any consequences would be taken lightly,” said Fadnavis.

Citing the upcoming festive season, the Deputy CM said that instructions have been given to the police and administration to be prepared.

“The boat belongs to an Australian citizen. Boat’s engine broke out in the sea, people were rescued by a Korean boat. It has now reached Harihareshwar beach. Keeping in mind the coming festive season, police and administration have been instructed to be prepared,” he said.

Maharashtra Anti-Terrorist Squad (ATS) has been put on the job and additional force will be deployed “if necessary”.

“ATS is also working on it. The additional force will also be deployed if necessary. All the precautions needed to be taken as per the norms of abundant caution,” he said.

Detailing about the boat, Fadnavis said that ‘Ladyhan’ named boat is owned by Australian women, her husband James Herbert is the captain of the boat.