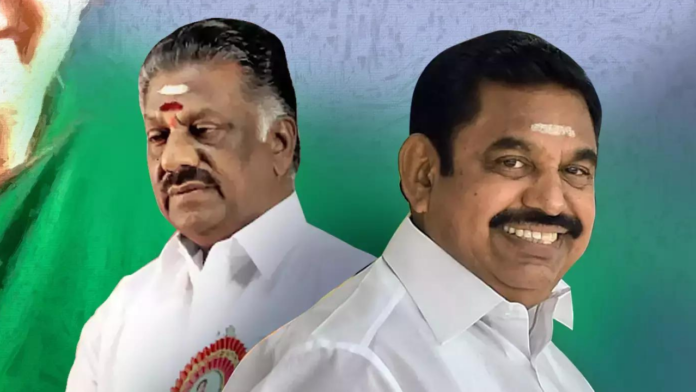 Chennai (Tamil Nadu): The battle between Edappadi K Palaniswami (EPS) and O Panneerselvam (OPS) is far from over as both have now embarked on a spree to “expel” each other’s supporters since July 11 general council meeting in which EPS who was elected as the party’s interim general secretary expelled OPS, who in turn announced that he was expelling the former from the party.

The former chief minister has sacked 39 OPS supporters so far for alleged “anti-party activities” after OPS was stripped as AIADMK’s coordinator and expelled from the party.

A total of 16 resolutions were passed in the crucial AIADMK General Council meeting held on July 11 including doing away with the dual leadership structure in the party by terminating the posts of coordinator and joint-coordinator.

After the demise of Jayalalithaa in 2016, the party has been following a dual-leadership formula with EPS as co-coordinator and OPS as coordinator.

The clamour has been growing louder for a single leader in the party since the district secretary meeting on June 14 this year.

A special resolution was also passed to sack OPS, JCD Prabhakar, Vaithilingam, and Manoj Pandian. The post of General Secretary has been revived, for which primary members of the party will vote for in fresh elections that will be held within four months.

However, OPS too responded with a similar approach and so far sacked 66 AIADMK members including EPS, Jeyakumar, Udhayakumar and Munusamy.

“General Council’s decision to expel me is not valid… We will take legal action according to the law. They don’t have the right to remove me,” OPS had said.

The party appointed Ponnaiyan as secretary for International MGR Forum and SP Velumani is appointed as Headquarters Secretary.

Further, Sellur Raju, Shanmugam, Dhanapal, Rajendra Balaji, Kadambur Raju and six others were appointed as organizing secretaries for the party.

Sellur Raju has said the party’s door is open for people who broke away from AIADMK.

“Those who left AIADMK (O Panneerselvam) should talk to the General Secretary (Edappadi Palaniswami) and rejoin the party. AIADMK’s door is open for you. The leaders who broke away from AIADMK must change their minds. The party can grow only if the majority goes behind them. Edappadi Palaniswami is a leader whom people and party workers like,” he said.

EPS will hold a meeting with party MLAs on July 17, according to the sources. The meeting will be held at the residence of EPS on Chennai’s Greenways Road.

Following the meeting, OPS wrote to the Election Commission urging it not to act upon the resolutions to bring changes in the by-laws of the party as the entire process is illegal and unlawful and without the authorisation of the Co-ordinator and Join Co-ordinator.

He said that the process of convening the illegal general council meeting, resolutions passed, appointments and amendments is “clearly a void” as per the bylaws of the party and the provisions of the Representation of People Act, 1951.

Meanwhile, VK Sasikala, who has a close aide of party leader Jayalalithaa, also reacted to recent developments and said that AIADMK’s strong structure has collapsed.

“Our AIADMK strong structure has collapsed because of a few betrayals and manipulation. AIADMK General Council was valid only till December 2016. Post that all are just functionary meetings. As long as I’m there, no one can expropriate or destroy AIADMK. I know how to unite the party,” she said.

Following the violence on July 11, AIADMK party headquarters in Chennai was sealed by the revenue department.

“To avoid further law and order issues, either they or their advocates should be present before the RDO office on July 25 to decide the control over party headquarter,” Chennai Police said.