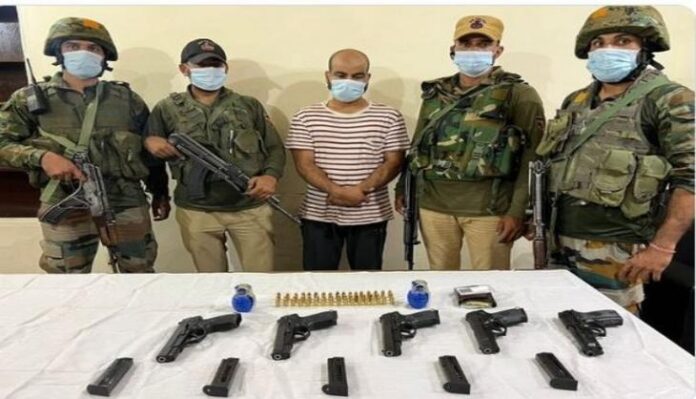 Budgam (Jammu and Kashmir): A ‘hybrid’ terrorist of the proscribed terror outfit Lashkar-e-Taiba (LeT) has been arrested by the Indian Army’s 34 RR unit in the Budgam area of Jammu and Kashmir, officials said on Sunday.

The accused arrested has been identified as Arshid Ahmad Bhat, a resident of Sangam Budgam. The arrests were made by a joint team of Srinagar Police and 2RR at Lawaypura.
The officials also seized incriminating materials which include 5 pistols, 5 magazines, 50 rounds.

Two hand grenades were also recovered from the terrorist.
A Case has been registered at Shalteng Police Station.

Earlier on May 1, another ‘hybrid’ terrorist of the proscribed terror outfit Lashkar-e-Taiba (LeT) was arrested by the Indian Army’s 34 RR unit along with Kulgam Police from Kashmir.

The hybrid terrorist was also involved in providing shelter, logistics and other support to the terrorists which includes transporting arms and ammunition and explosive material of the terrorists in district Kulgam.

The arrested terrorist has been identified as Yamin Yousaf Bhat, a resident of Kulgam’s Gadihama, said the Kashmir police.

Incriminating materials consisting of arms and ammunition including a pistol, one magazine, two hand grenades and 51 (9 mm) pistol rounds have been recovered, stated police.

He was also in contact with PoK based terrorists and was working under their command and guidance. More arrests and recoveries are expected in the instant case, stated the police.