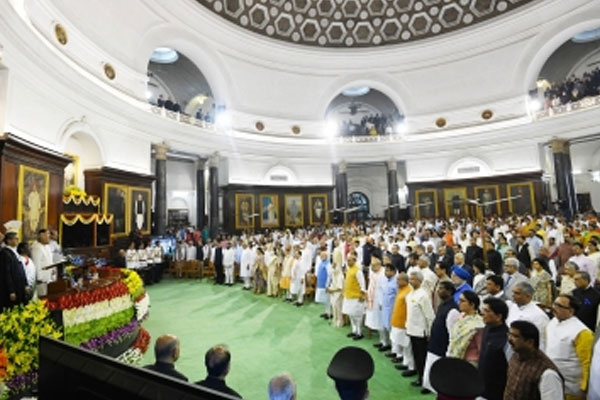 New Delhi [India]: As Droupadi Murmu took oath as the President of India on Monday, the Centre and Opposition parties locked horns over the seating arrangements of the Leader of the Opposition in the Rajya Sabha Mallikarjun Kharge in the Central Hall of the Parliament during the swearing-in ceremony.

“We are writing to express our shock and protest at this deliberate disrespect shown to a very senior leader violating the warrant of precedence and not in accordance with protocol courtesies due to him,” the letter read.

In the swearing-in ceremony, Kharge was seen sitting next to Union ministers Narayan Rane and Sarbananda Sonowal.

The Centre on the other hand refuted the allegation of the Opposition and said the setting arrangement was made as per the order of precedence.

“It has been alleged that there was a violation of protocol during the presidential oath-taking ceremony. The ceremony is organised by the Home Ministry. There is an order of precedence. Going by that, the Leader of Opposition should be seated in the third row,” said Union Parliamentary Affairs Minister Pralhad Joshi.

“To respect the position of Mallikarjun Kharge, he was provided with a seat in the first row. When he still complained that it was on the corner, the staff offered to move him to the centre, but he refused. On Saturday, for the farewell function, he was duly invited. He had been allotted a seat close to the Prime Minister. But he did not show up. In a way, it was an insult to the outgoing President, the Chairman and the Speaker,” added Joshi.

Members of the Council of Ministers, Governors, Chief Ministers, heads of diplomatic missions, Members of Parliament and principal civil and military officers of the government were also present at the swearing-in ceremony.

The 64-year-old Murmu defeated Opposition presidential candidate Yashwant Sinha to become the first tribal and the second woman to hold the top constitutional post.
President Murmu also received a ceremonial salute at the forecourt of the Rashtrapati Bhavan after being sworn in as the 15th President of India.