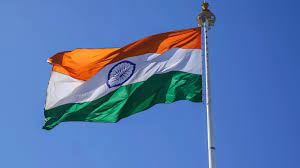 Lucknow (Uttar Pradesh): Uttar Pradesh government, as part of the celebration of the 75th anniversary of the country’s Independence, is set to drape a total of 4.26 crore houses and 50 lakh government and non-government offices in tricolour, according to an official release.

The state government has already produced 3.86 crore tricolours so far against the target of 4.76 crore, as part of the Yogi Government’s ‘Har Ghar Tiranga’ campaign to mark Amrit Mahotsav. “Of the total target, the MSME (micro, small and medium enterprises) department of the state government has procured 2 crore flags through the Government e-Marketplace (GeM) portal while over 20,000 NGOs and private sewing units are working round the clock to produce around 1.15 crore flags,” said the release.

Women’s self-help groups have completed the production of more than 96 lakh flags. As many as 2.26 crore flags are to be made at the district level.

“Similarly, NGOs and UP Khadi and Village Industries Board have made 36.4 lakh tricolours whereas private sewing units have stitched more than 35.3 lakh flags so far. Besides, an order placed for making 50 lakh Khadi flags for government/non-government organisations has also been completed,” it said.

Meanwhile, the union government has changed the country’s flag code to allow the tricolour to fly both in the daytime and at night now. Polyester flags can also be produced by machines.

Meanwhile, Union Home Minister Amit Shah on Tuesday said that the “Har Ghar Tiranga” programme is a message to the world that every citizen of India is united to take forward India’s journey of development, prosperity, security and culture.

Addressing the “Tiranga Utsav” programme on the 146th birth anniversary of Pingali Venkaiah in New Delhi, Shah said the Tiranga is a symbol of the nation in every citizen’s heart.