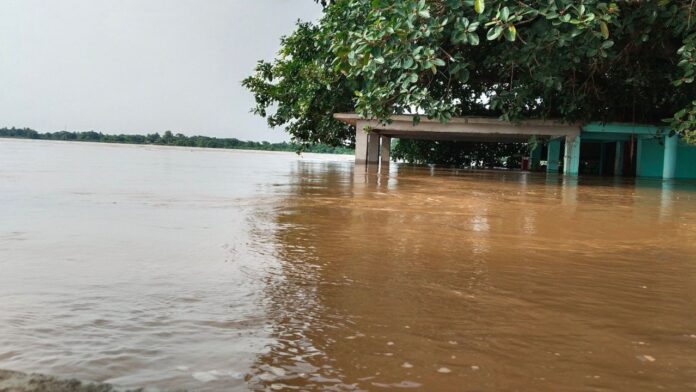 Bhubaneswar (Odisha): Over 4.67 lakh people in 1,757 villages in 10 districts of Odisha have been affected so far by the flood situation due to the heavy rainfall in the state, informed Special Relief Commissioner, Pradeep Kumar Jena on Wednesday.

Jena said that “Due to the heavy rainfall and subsequent flood, over 2.5 lakh people in 425 villages have remained marooned, whilst a total of over 4.67 lakh people in 10 districts have been affected.” He further stated that by Wednesday evening, over 60,000 people were evacuated to safe places.

“The Administration is alert. If needed, we will evacuate more people. Those who are evacuated are being provided with food and water,” said the official.

Informing about the status of the flood water level in Hirakud Dam, Jena said that the flood water is being discharged from Hirakud reservoir through 40 gates and the inflow of flood water from the dam has reduced to 5.80 lakh cusecs while the outflow of water remained at 6.69 lakh cusecs.

He further said, “Wednesday night is crucial, as peak flood will pass through low laying areas of Cuttack, Jagatsinghpur, Kendrapada and Puri districts and following which the water level is likely to start receding from tomorrow.”

Meanwhile, the state government has asked the district education authorities of the flood-affected districts to make the school buildings available for shelter and relief distribution.