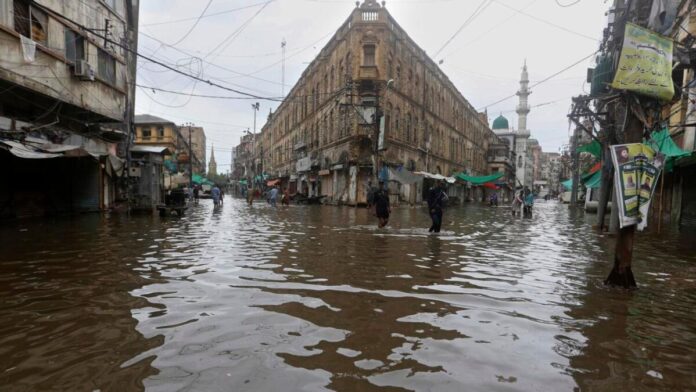 Islamabad [Pakistan]: The death toll from floods has crossed 1,000 in Pakistan and thousands more have been injured or displaced since June.

At least 1,033 people have died while 1,527 have been injured since June 14 from the rains and floods, Geo News reported citing National Disaster Management Authority (NDMA).

As per the data, four died in Balochistan, six in Gilgit Baltistan, 31 in Khyber Pakhtunkhwa, and 76 in Sindh.

Cumulative data from June 14 from across Pakistan showed that 3,451.5 km of road has been damaged, and 149 bridges have collapsed, 170 shops were destroyed.

At least 110 districts of Pakistan have been hit by the floods with 72 of those districts declaring calamity hit, according to Geo News.

Pakistan is grappling with its worst natural disaster in over a decade. The floods affected the lives of millions of people after which the Pakistan government declared a “national emergency”.

The authority shared that 51,275 have been rescued while 498,442 have been moved to relief camps.

The NDMA shared that Pakistan’s 30-year average showed that the country has received 134mm of rain and this year it received 388.7mm of rain. 190.07% more than the average.

As of 25 August, Pakistan has experienced 375.4 mm of rainfall – 2.87 times higher than the national 30-year average of 130.8 mm. These rains have primarily fallen on Balochistan, Sindh and parts of Punjab, with Balochistan receiving five times its average 30-year rainfall and Sindh receiving 5.7 times its 30-year average, the statement reads.

On 26 August, the Pakistan Meteorological Department (PMD) Flood Forecasting Division (FFD) issued a warning that very high to exceptionally high-level flooding is expected in River Kabul at Nowshera in KP province, as well as in tributaries of the Kabul and Indus rivers until 28 August.