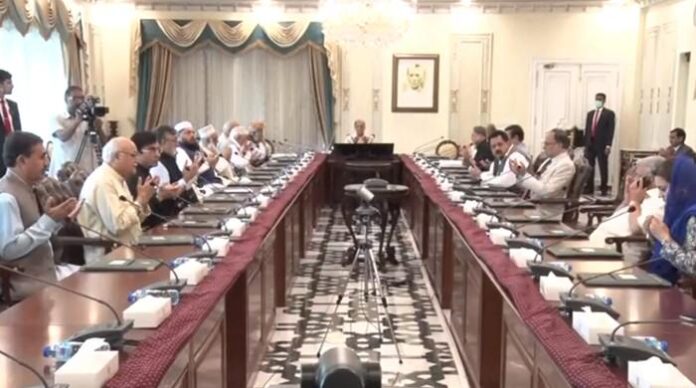 Islamabad [Pakistan]: The Pakistan government led by Shehbaz Sharif is considering placing the name of Pakistan Tehreek-e-Insaf (PTI) leaders on the Exit Control List after the Election Commission of Pakistan’s prohibited funding ruling.

The coalition government has also decided to request Chief Justice Umar Ata Bandial to constitute a full court to hear the case it is going to file in the wake of the prohibited funding verdict, Geo News reported.

The Election Commission of Pakistan (ECP), in its verdict, on Tuesday, said that PTI had received the prohibited funds and issued a show-cause notice to them asking why its funds should not be confiscated.

In a meeting after the ruling, The News International, quoting sources, reported that Prime Minister Shehbaz Sharif chaired a meeting of coalition partners that decided to move the Supreme Court.

Sources said all the allies were planning to take strict legal action in light of the ECP’s verdict.

The sources said the meeting also discussed the possibility of placing PTI leaders’ names on the ECL to prevent them from leaving the country.

It also formed a political committee to follow up on the ECP verdict in both aspects.

A day earlier, in its verdict, the Commission found that the donations were taken from 34 countries in fundraising. These included America, Australia, and the UAE, Geo News reported. The ECP also said that the PTI had taken funds from an American businessman.

The ECP observed the ‘unknown accounts’ and said that hiding accounts are a “violation of the Constitution”.

The ECP has decided to issue a show-cause notice to the PTI to explain why the commission should not seize the funds it received.

According to the publication, the ECP, Monday, released the cause list for the case.

The cause list showed that the verdict would be announced by a three-member bench led by Chief Election Commissioner (CEC) Sikandar Sultan Raja, who arrived early in the morning at the office.

The decision to announce the verdict comes after a Financial Times expose revealed that the PTI received funding from Wootton Cricket Club belonging to Abraaj founder Arif Naqvi.

The funds were generated through a charity match and an Arab personality also pitched in a large sum of money.

The funds were generated through a charity match and an Arab personality also pitched in a large sum of money, reported Geo News.

The PTI hid funds worth millions of rupees from the ECP, the report of an ECP scrutiny committee probing the party’s funds revealed on January 4, reported Geo News.

The report stated that the PTI provided “false information” regarding the party’s funding to the ECP.

It said that the State Bank of Pakistan (SBP’s) bank statement revealed that the party had received Rs 1.64 billion in funding.

The scrutiny committee was formed in 2019 to audit foreign funding received by the PTI.