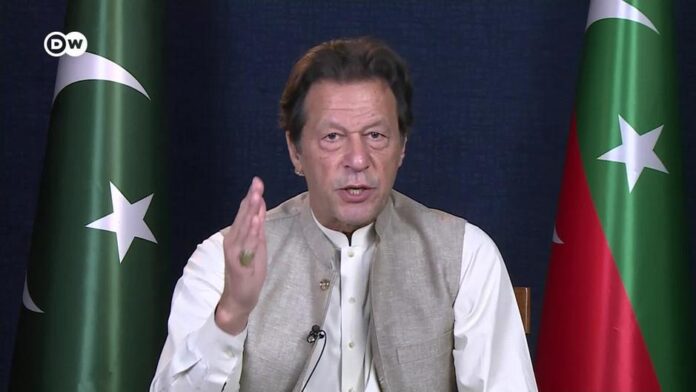 Islamabad [Pakistan]: Even as the Western bloc continues to impose sanctions on Moscow, former Pakistan prime minister Imran Khan has said that Pakistan’s future is tied to Russia.

In an interview with German broadcaster Deutsche Welle (DW), the beleaguered PTI chief, said it was good to take a moral stand on the international stage but it should not be at the cost of its citizens. Imran said that as the leader of the country, he only wanted to look after the interests of the 220 million people, adding that Pakistan can benefit from Russia by importing gas, oil and wheat.

“Pakistan’s future is tied up with Russia in terms of gas, oil and specifically wheat because we have to import wheat from Russia because of 220 million population. When you start condemning people you are taking sides,” the former prime minister told DW.

“Taking a moral stand on international issues is very good but when your country stands to suffer as a result of it, you have to have the luxury to be strong and rich enough to start taking sides,” he added.

Divulging the details of his February trip to Moscow during the launch of Russia’s “special military operation” in Ukraine, Imran Khan said that he landed in the capital a day before the war began.

The former Pakistan prime minister said that he was scheduled to meet Russian President Vladimir Putin the next morning, but he woke up to see the invasion happening. Imran denied that he was consulted on the matter.

He further stated that had he known that the Russia-Ukraine war would begin, he would not have gone ahead with his trip.

“When I arrived in Moscow, the meeting was the next morning. When we woke up in the morning that’s when the invasion took place. … Hardly did I know this would happen. Had I known, I certainly wouldn’t have taken the trip,” he said.

This interview comes against the backdrop of the growing financial difficulties of cash-strapped Pakistan.

Recently, Pakistan Energy Ministry asked industrial experts to provide analysis for importing oil from Russia, as the country seeks to procure the commodity at a cheaper rate, Geo News reported.

While the Western countries have set out to punish Russian President Vladimir Putin for the war on Ukraine by sanctioning a raft of Russian companies and oligarchs and adding others to a trade blacklist, Pakistan is mulling trade with Russia.