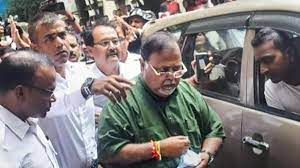 Kolkata (West Bengal): West Bengal minister Partha Chatterjee and his aide, Arpita Mukherjee, have been sent to Enforcement Directorate (ED) custody till August 3. The Calcutta court also gave orders to conduct medical check-ups of both the arrested accused after every 48 hours.

The Court also gave orders to the ED to not interrogate Arpita between 9 pm to 6 am. Partha was arrested by the Enforcement Directorate (ED) in connection with the alleged School Service Commission (SSC) scam in West Bengal on Saturday.

The ED unearthed many disproportionate assets of Partha Chatterjee since his arrest, of which were three flats in West Bengal’s Diamond City.

The arrest of Partha Chatterjee followed Rs 21 crore in cash and jewellery worth above Rs 1 crore being recovered from the Kolkata residence of Arpita Mukherjee, a close aide of the former education minister.

Advocate on behalf of the accused person submits that the petitioner Partha Chatterjee is an innocent one and falsely been implicated in this case which will be revealed at the time of trial. The Advocate further submitted that no such recovery has been made from the possession of the accused petitioner and further detention of the accused will not serve any purpose and has prayed for enlarging him on bail in any condition.

Special Public Prosecutor on behalf of the ED submitted that a search was conducted at the premises of Partha Chatterjee and Arpita Mukherjee and other places linked with the case on July 22, 2022 and during the course of search opertaions at the residential premises of Partha Chatterjee, various incriminating documents relating to immovable properties in the name of Arpita Mukherjee and companies were recovered and seized and during search, at the premises of Arpita Mukherjee cash amount to the tune of Rs. 21.90 crores has been recovered which is nothing but proceedings of crime generated in relation to the criminal activities for giving illegal appointments to Assistant Teachers for Class IX to XII as well as Primary Teachers in lieu of money.

It was further submitted by the ED that Partha Chatterjee and Arpita Mukherjee are found involved for the commission of offence of money laundering by indulging in criminal conspiracy for the object of illegally giving jobs for the post of Assistant Teachers and also in Primary Teachers.

“By this, they generated huge proceeds of crime and for having knowingly indulged, assisted, involved and being a party in the process and actively connected to the proceeds of crime including its concealment, possession, acquisition, use and projecting and claiming the said proceeds of crime as untainted property deriving illegal monetary gains and have committed offence under section 3 punishable under Section 4 of PMLA Act and raised strong objection for enlarging the accused petitioner on bail,” said SV Raju.

Considering the initial stage of investigation and the nature and gravity of offence, prayer for bail was rejected by the Court.

Coming to Chatterjee complaining of ill-health and getting admitted to the hospital, the ASG said, “Previously, several leaders avoided interrogation by getting themselves admitted in SSKM. Admission to SSKM was against rules, and that is why Partha was sent to AIIMS Bhubaneshwar. Now, we are waiting for the report from the hospital. He is faking illness. He is completely fine, does not have a fever, and his heart is working fine…The oxygen level is fine…Blood Pressure is okay. He said, ‘I will not come for investigation …SSKM is my hospital’.”

Meanwhile, the Director of AIIMS Bhubaneswar said though Chatterjee is suffering from several chronic illnesses, hospitalisation is not required at this moment. After the check-up, the reports were handed over to the Investigating Officer (IO) of the Enforcement Directorate, Chatterjee’s lawyer and the concerned doctor from SSKM Hospital as directed by the Calcutta High Court.

On Monday morning, the former Education minister was taken to the Netaji Subhas Chandra Bose International (NSCBI) Airport in an ambulance. A green corridor was arranged for obstruction-free movement of the convoy.

The ED officials along with Chatterjee’s lawyer, Anindya Kishor Raut, and a doctor from SSKM also accompanied the former Education minister as directed by Justice Bibek Chaudhuri. Chatterjee reached the airport at around 8 am. There Airports Authority of India (AAI), Kolkata, had arranged another ambulance to take Chatterjee to the air ambulance as no outside vehicle is allowed on the runway and its adjacent areas.