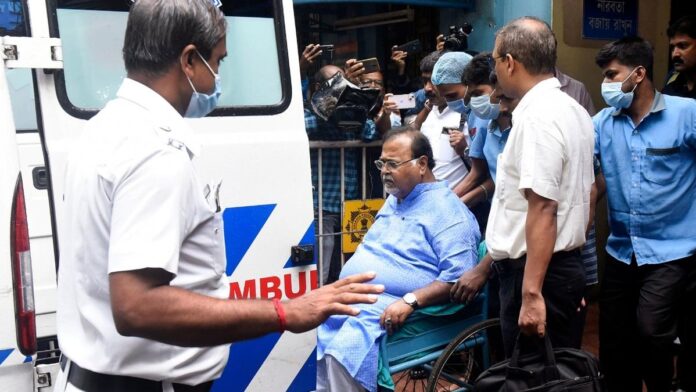 Kolkata (West Bengal): West Bengal Minister and former Education Minister Partha Chatterjee was bought to the Central Government Office (CGO) complex in Kolkata on Tuesday morning, a day after he and his aide Arpita Mukherjee were sent to the custody of the Enforcement Directorate till August 3.

He reached the Kolkata airport this morning, after being discharged from AIIMS Bhuwneshwar.

“Partha Chatterjee’s health is stable. Medical reports have come, and it’s fine. A thorough examination of him was done. Though he had some problems, he didn’t need to be admitted to the hospital, he’s being monitored closely,” said Dr Tushar Kanti Patra, SSKM Hospital in Kolkata.

Notably, Partha Chatterjee and his aide, Arpita Mukherjee, have been sent to Enforcement Directorate (ED) custody till August 3. The Calcutta court also gave orders to conduct medical check-ups of both the arrested accused after every 48 hours.

The Court also gave orders to the ED to not interrogate Arpita between 9 pm to 6 am.

Partha was arrested by the Enforcement Directorate (ED) in connection with the alleged School Service Commission (SSC) scam in West Bengal on Saturday.

The ED unearthed many disproportionate assets of Partha Chatterjee since his arrest, of which were three flats in West Bengal’s Diamond City.

The arrest of Partha Chatterjee followed Rs 21 crore in cash and jewellery worth above Rs 1 crore being recovered from the Kolkata residence of Arpita Mukherjee, a close aide of the former education minister.

On Monday, the Director of AIIMS Bhubaneswar said though Chatterjee is suffering from several chronic illnesses, hospitalisation is not required at this moment.

After the check-up, the reports were handed over to the Investigating Officer (IO) of the Enforcement Directorate, Chatterjee’s lawyer and the concerned doctor from SSKM Hospital as directed by the Calcutta High Court.

On Monday morning, the former Education minister was taken to the Netaji Subhas Chandra Bose International (NSCBI) Airport in an ambulance. A green corridor was arranged for obstruction-free movement of the convoy.

The ED officials along with Chatterjee’s lawyer, Anindya Kishor Raut, and a doctor from SSKM had also accompanied the former Education minister as directed by Justice Bibek Chaudhuri.

Chatterjee reached the airport at around 8 am.

There, Airports Authority of India (AAI), Kolkata, had arranged another ambulance to take Chatterjee to the air ambulance as no outside vehicle is allowed on the runway and its adjacent areas.

The Enforcement Directorate on Friday (July 23) recovered Rs 20 crore in cash from the house of an associate of West Bengal Minister Partha Chatterjee.

The ED raided Arpita Mukerjee’s house in connection with an alleged teacher recruitment scam in West Bengal. “The said amount is suspected to be proceeds of crime of the said SSC scam,” the probe agency had said in a statement.

The search teams are taking the assistance of bank officials for the counting of cash through counting machines. Photos of the house taken during the raid show Rs 2000 and Rs 500 notes that were recovered.

Partha Chatterjee, who is presently the minister for industries and commerce, was the education minister when the alleged illegal appointments were made in government-run and aided schools by West Bengal School Service Commission (WBSSC).

The ruling Trinamool Congress described the raids as a “ploy” by the BJP government at the Centre to “harass” its political opponents.