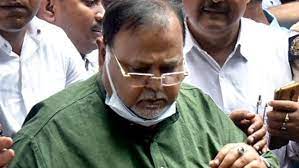 Kolkata (West Bengal): West Bengal cabinet minister Partha Chatterjee who was arrested by Enforcement Directorate (ED) on Saturday will be shifted to AIIMS Bhubaneswar on Monday.

This comes after Calcutta High Court’s order. The doctors in AIIMS Bhubaneswar will furnish the medical reports, as per the direction of the court. Chatterjee is currently admitted in SSKM Hospital in Kolkata after he complained of chest pain.

On Saturday, ED arrested Chatterjee following the raids by the central probe agency which seized Rs 21 crore in cash from the premises of his close associate Arpita Mukherjee, in connection with an alleged teacher recruitment scam in the state.

After his arrest, the Bankshall Court in Kolkata granted two days of ED custody to Chatterjee on Saturday. However, Chatterjee developed heart pain and was later admitted to SSKM hospital.

“Partha Chatterjee (West Bengal cabinet minister and former Education Minister of the state) is not feeling well. He has developed heartache. We demanded that proper medical facilities should be given to him if ED’s custody is granted,” said Chatterjee’s lawyer.
The arrests were made at Chatterjee’s residence in Kolkata where the ED team was present since Friday.

Earlier on Friday, ED officials raided the residences of West Bengal ministers Partha Chatterjee and Paresh Adhikari and several others and recovered huge cash amounting to approximately Rs 20 crore from the residential premises of Arpita Mukherjee.

The said amount is suspected to be the proceeds of the crime of said SSC scam. The search team is taking the assistance of bank officials for the counting of cash through cash counting machines.

A total of more than 20 mobile phones have also been recovered from the premises of Arpita Mukherjee, the purpose and use of which are being ascertained, said the probe agency.

Besides cash, a number of other incriminating documents, records, details of dubious companies, electronic devices, foreign currency and gold have also been recovered from the various premises of the persons linked to the scam.