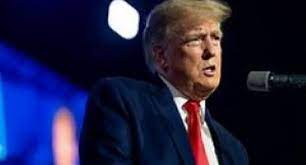 Washington [US]: Former US President Donald Trump said that the Department of Justice (DOJ) and the FBI returned his passports after taking them during the raid of his Mar-a-Lago residence in Florida last week.

On August 8, the FBI executed a search warrant at Mar-a-Lago to recover materials linked to possible violations of the Espionage Act.

Trump has condemned the raid as a weaponisation of the US justice system against him and claimed to have declassified all materials present at his Mar-a-Lago residence.

“The DOJ and FBI just returned my passports. Thank you! Unfortunately, when they Raided my home, Mar-a-Lago, 8 days ago, they just opened their arms and grabbed everything in sight, much as a common criminal would do . This shouldn’t happen in America!” Trump said on Tuesday in a statement in a Truth Social post.

The judge authorised the FBI to search what the bureau called the “45 Office” as well as “all other rooms or areas” at Mar-a-Lago that were available to former President Trump and his staff for storing boxes and documents.

The search warrant identifies three possible federal crimes as the reasoning behind the search: violations of the Espionage Act, obstruction of justice and criminal handling of government records. Read the full warrant.

According to the unsealed warrant, the FBI collected photos and information about the president of France, among other things.

One of the newly unsealed documents is a search warrant “receipt” revealed that FBI agents removed more than 20 boxes from the former President’s resort and residence in Palm Beach, Florida, as well as binders of photos, and sets of classified government materials and at least one handwritten note, CNN reported.