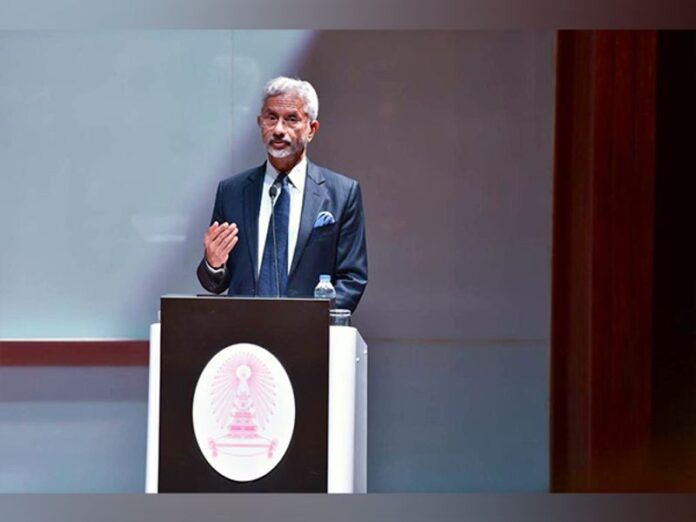 New Delhi [India]: Referring to the situation in Afghanistan after the US exit, External Affairs Minister (EAM) S Jaishankar on Thursday defended India’s ties with Myanmar and asserted that being an immediate neighbour, the understanding and interests are very different from people who are far away.

“I trust people closer to the problem than people far away, because people far away have a tendency to walk away when they feel like, we saw that in Afghanistan. When you are an immediate neighbour, the understanding and interests are very different from what people far away.”

It must be noted that there has been widespread criticism of the US’ handling of the military pullout from Afghanistan which led to the takeover of the country by the Taliban.

On the ties India shares with Myanmar, Jaishankar stressed, “We are a land neighbour. When you are an immediate neighbour, you have understanding, interests which is very different from what people far way convey when they often pontificate.”

Jaishankar who is on a visit to Thailand pointed out that India has consistently supported democracy and pluralism.

“We deeply believe that Myanmar is best served by being a democracy by reflecting the sentiments and wishes of the people,” EAM Jaishankar said on the Myanmar situation.

“We have a border, we have incidents at the border, we have organised crime, we have refugees, factors when you have a land border with a neighbour. When you are far away it is not part of the calculations, life is binary,” he added.

EAM Jaishankar said that India will manage the ties it holds with Myanmar as it is natural for India to support the democratic aspiration of the people.

“To hear we are falling short, I think that is a little difficult to swallow. Our position is clear, but we have to manage our border relationship, compulsions of being a neighbour.”

“At the moment the relationship is going through an extremely difficult phase after what China did at the border,” he continued saying.

The Asian Century refers to the dominant role that Asia is expected to play in the 21st century due to its burgeoning economy and demographic trends.

On the import of Russian oil, EAM Jaishankar said, “Different yardsticks of judgement. We are not the only oil importing country, and by the way no sanctions on oil..we are a low-income society and every dollar increase in the price of oil is paid through by some Indian through their savings.”

Moreover, speaking on the Rohingya issue, the Minister noted that India has discussed with Bangladesh over the issue and what matters for them is repatriation. “We have been supportive of Bangladesh,” he affirmed.

Earlier in the day, Jaishankar spoke extensively on India’s Vision of the Indo-Pacific at a Thailand University.

Emphasising that India envisages a free, open, inclusive and peaceful Indo-Pacific built on a rules-based order, External Affairs Minister S Jaishankar, who is on a visit to Thailand, said that only those whose mindsets are built around spheres of influence and are uncomfortable with the democratisation of world affairs will dispute the Indo-Pacific.

“A more collaborative outlook that transcends the orthodoxy of earlier theatres is the need of the day. This is about recognising the realities of globalisation and the consequences of re-balancing. Only those whose mindsets are built around spheres of influence and uncomfortable with the democratisation of world affairs will dispute the Indo-Pacific today,” EAM Jaishankar said at the Chulalongkorn University in Thailand.

EAM Jaishankar who is in Thailand attended the 9th India-Thailand Joint Commission Meeting and offered prayers at the Devasthana at Bangkok on Thursday morning.

Underlining the shared religious and cultural traditions between both countries, the EAM said he received the blessings of Phra Maharajaguru Vidhi