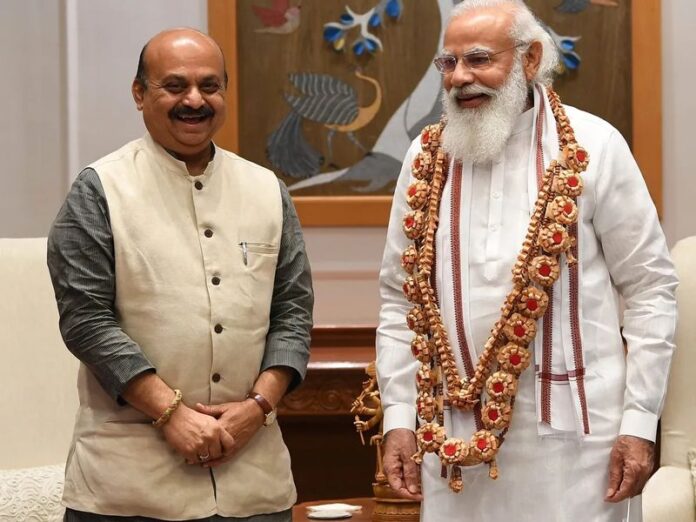 New Delhi [India]: Karnataka Chief Minister Basavaraj Bommai on Sunday said that the upgradation of ITIs, Kissan Samman and other initiatives taken to make India a USD5 Trillion economy and implementation of the New Education Policy came up for discussion during the BJP Chief Ministers’ Council meeting held on Sunday.

Prime Minister Narendra Modi participated in the meeting at BJP headquarters in the national capital. The meeting was chaired by party national president JP Nadda. “Attended Hon’ble PM @narendramodi Ji’s meeting with CMs & deputy CMs of BJP ruled states to discuss the developmental work done in the states. The meeting was held at the @BJP headquarters in Delhi under the chairmanship of @BJP4India President @JPNadda Ji,” Bommai tweeted.

“The council meets frequently to discuss the progress of various projects and programmes across the country, especially the centrally sponsored programmes. The Prime Minister has given some suggestions and guidance. The next meeting would be held in October,” Bommai said while speaking to the media.

Replying to a question on his itinerary in Delhi, Bommai said that he is scheduled to participate in the oath-taking ceremony of President-elect Droupadi Murmu on Monday and then meet the union Sports minister. He is also set to call on union ministers Piyush Goel and Bhupendra Yadav.

Earlier in the day, the Chief Ministers and Deputy Chief Ministers of BJP-ruled states were also present at the meeting with senior party leaders to present their report on the development and welfare schemes as the party gears up for the upcoming assembly polls and the 2024 Lok Sabha election.

During the meeting, Prime Minister Modi emphasized the better implementation of some of the key schemes and initiatives of the government like GatiShakti, Har Ghar Jal, Svamitva, DBT implementation, Government eMarketplace, especially in the BJP-ruled states.

Talking about rural areas, PM Modi spoke about the significance of Gobardhan and the need to further popularise the initiative. He underlined the positive impact of nano-fertilizers on crop productivity and spoke about increasing their usage.

He stressed the need to ensure saturation-level coverage of all key schemes and said that BJP-ruled states should take a lead towards this.

PM Modi put significant emphasis on the need to ensure ease of doing business. He spoke about several initiatives taken by the government towards this.

He encouraged states to take steps towards further boosting the business environment in the country.

PM Modi asked the chief ministers to ensure that their states accord due importance to sports and ensure the provision of the best facilities for encouraging participation and engagement of youth in large numbers.

During the meeting, the progress of various welfare schemes and development programmes of the central government in these states were reviewed.

In the last meeting, PM Modi had asserted that the development of youth and women empowerment are the area of priority of the government and said that there is a need to strengthen the nutrition campaign and tackle malnutrition.

The last developmental meeting was held in Varanasi last year. The Prime Minister participated in a conclave of Chief Ministers of BJP- ruled states.

The conclave provided an opportunity to share governance-related best practices and is in line with the Prime Minister’s vision of furthering team India’s spirit.