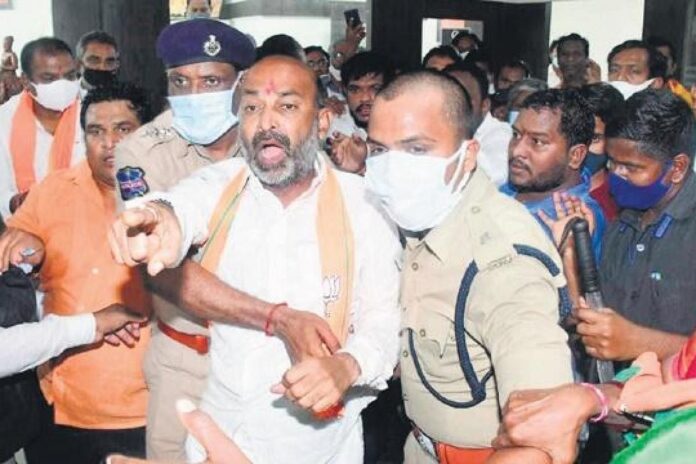 BJP leader and official spokesperson NV Subash confirmed reports of his detention. “Bandi was holding a protest in Jangaon District against the arrest of BJP workers in Hyderabad,” Subash said.

He was holding a protest Dharma Deeksha against the arrest of BJP workers in Hyderabad who allegedly attacked MLC Kavitha’s residence on Monday.

Hyderabad South Zone Police filed an FIR against Raja Singh on Tuesday morning. The FIR was registered against him at the Dabeerpura Police Station under sections 153a, 295, and 505 of the Indian Penal Code.

Protests had erupted in parts of Hyderabad late on Monday after Singh, the MLA from Goshamahal released a video in which he purportedly made the remarks. Protestors gathered in front of the city Police Commissioner’s office demanding immediate action against the BJP MLA.

Police took the protesters into custody at the commissioner’s office in Basheer Bagh and shifted them to several police stations.

“We immediately took all the details from them and registered a case under relevant sections of IPC and further probe into the case has been initiated,” Inspector Dabeerpura police station said.

Police took the protesters into custody at the commissioner’s office in Basheer Bagh and took them to several police stations.

On August 19, the BJP MLA was put under house arrest after he opposed the show that was held by standup comedian Munawar Faruqui in Hyderabad on August 20.

Raja Singh made a video claiming that Hyderabad Police had given protection to the stand-up artiste and helped to make his show successful.

The BJP MLA alleged that Faruqui had made certain remarks that hurt religious sentiments and used foul language for him.