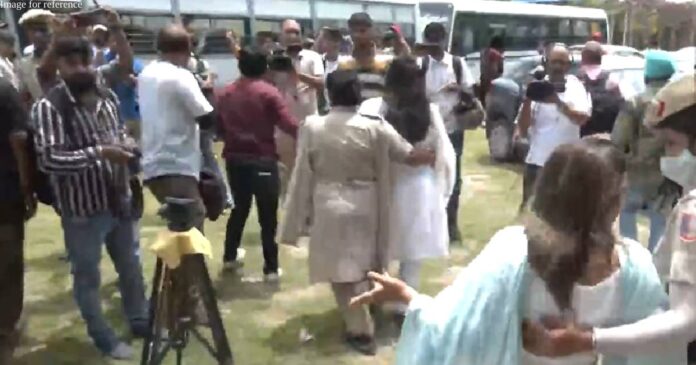 “They are announcing that they have imposed Section 144 here. Nobody raised slogans or misbehaved, or we did not do anything what do they fear? The more they stop us, the bigger we will grow,” a AAP worker said.

AAP workers were protesting against CBI raid at Sisodia’s residence which is going on since this morning.

The CBI today raided 21 places across the seven states of India in connection witthe h CBI’s investigation into the alleged irregularities in the formulation and execution of the Delhi Excise Policy brought in November 2021. The CBI has also registered an FIR in this connection.

Sisodia took to Twitter to post: “CBI has arrived. We are honest, building a future for lakhs of children. Unfortunate that in this country, whoever does good work is hassled just like this, that is why our country is still not number-1.”

“I extend my welcome to the CBI. I will cooperate with the investigation so that the truth comes out at the earliest. Till now many cases have been filed against me but nothing has come out. Nothing will come out of it either. My work cannot be stopped for a good education in the country,” Sisodia tweeted.

A top CBI official informed that besides the residence of Sisodia and 20 other locations in Delhi-NCR, the premises of four public servants, including former Excise Commissioner of Delhi Arava Gopi Krishna– during whose tenure the revamped Excise policy was approved– are also being raided by the CBI.

“Raids are going on at 21 places in Delhi and NCR, including the residence of Manish Sisodia and premises of four public servants in the Excise Policy case.”
Earlier in July, Lieutenant Governor V K Saxena had recommended a CBI probe into Delhi’s revamped excise policy. He approved the suspension of 11 officials over “lapses” in the implementation of the Excise Policy 2021-22.The suspended officials included Gopi Krishna and deputy excise commissioner Anand Kumar Tiwari.

Earlier on August 6, former Lieutenant Governor Anil Baijal was accused by Deputy CM Manish Sisodia of changing his stand on the issue of opening liquor shops in unauthorized areas of Delhi.

Sisodia also tweeted that allegations made against him and the Delhi health minister Satyendar Jain were not true.