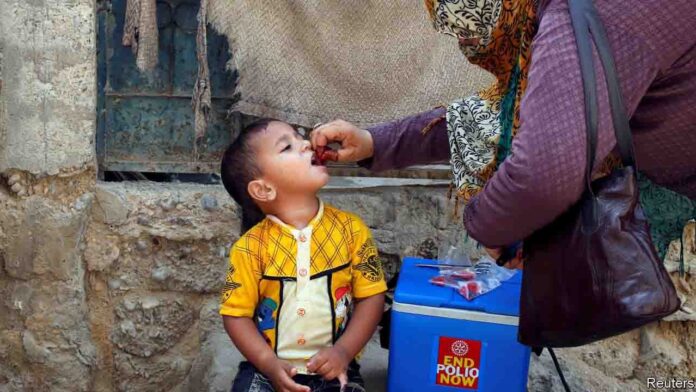 Islamabad [Pakistan]: Pakistan Federal authorities on Tuesday confirmed that poliovirus was detected in seven cities in several provinces of the country after testing environmental samples from various cities.

The authorities confirmed the presence of the poliovirus in four Khyber Pakhtunkhwa cities after testing the sewage samples of Peshawar, Bannu, Nowshera, and Swat, Geo News reported.

As many as 13 cases of polio were confirmed by federal officials in the North Waziristan district of Khyber Pakhtunkhwa and one case was registered in Laki Marwat.

Poliovirus was also detected in sewage samples from Islamabad and Rawalpindi.

The results of the testing of environmental samples for polio in several other cities have not been released yet, local media reported.

Notably, cases of more polio infections are suspected to surge as viral circulation is expected to increase from the months of May to September.

Pakistan’s failure to eliminate Poliovirus reflects the acute lack of commitment and obligation on the part of the government and society toward saving children from the menace of this devastating disease.

Despite receiving substantial foreign funding and carrying out several campaigns for countering polio over the years, there have been some serious lapses in the state’s efforts to address this pernicious health problem, a media report said.

Moreover, despite numerous supplementary immunisation campaigns, the failures in Pakistan’s polio eradication campaigns are now obscuring the global scenario for a polio-free world.

The problem is rooted in financial and organisational deficits, as well as active conflict and insecurity, which has caused the persistent failure of effective immunisation campaigns in the country.

Pakistan and Afghanistan have faced significant security challenges along the border, including targeted attacks on polio workers and security guards and an absolute ban on polio immunisation in certain areas.

Diffidence in the region is often listed as a significant hindrance to polio eradication, reported Global Start View.

Many polio workers and security personnel have lost their lives in the past years during polio vaccination campaigns, and such incidents have been one of the major reasons that polio is still endemic in Pakistan.

According to media reports, as many as 70 polio workers have been killed in terrorist attacks since 2012, mainly in the province of Khyber Pakhtunkhwa, reported Global Strat View.

Interestingly, in many cases, the family members show reluctance towards vaccination. Most parents refuse to administer polio drops to their children due to misapprehension about the vaccine. They believe that it will harm or sterilise their children.

Such discernments are prevalent in certain areas of the tribal regions of Khyber Pakhtunkhwa.

Parents mainly refuse to immunise their children due to a lack of awareness, doubts regarding vaccine quality, misunderstandings related to vaccination, and low confidence in vaccinators, reported Global Strat View.

Pakistan detected its first polio case on April 22 after over a year.