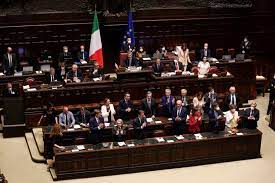 Mattarella made the announcement on Thursday in an address to the country after accepting the resignation of Prime Minister Mario Draghi, Xinhua News Agency reported.

Draghi confirmed his desire to resign during a meeting with President Sergio Mattarella, Sputnik reported citing the presidential office.

His decision to step down followed a confidence vote held in the Senate on Wednesday, which the government passed but with a very thin majority because Five Star Movement, right-wing League and centre-right Forza Italia parties boycotted the vote.

All three were major allies in the broad coalition that has supported Draghi’s national unity cabinet since its inception on February 13 last year.

“I signed the decree for the dissolution of the chambers in order for new elections to be called within the 70-day deadline set by the constitution,” Mattarella said.

Mattarella explained that dissolving the parliament earlier than due was “always a last-resort choice to make” especially when lawmakers were expected to fulfil crucial obligations, Xinhua reported.

According to media reports, the outgoing cabinet will remain in office for the current affairs until a new one is formed after the election.

However, Mattarella warned that the country’s many priorities needed political forces to act with a sense of responsibility and in a constructive way during the short campaign.

“It is my duty to underline that the period we are facing does not allow pauses in the actions indispensable to compensate for the effects of the socio-economic crisis, which is causing serious consequences for firms and families,” Mattarella noted.