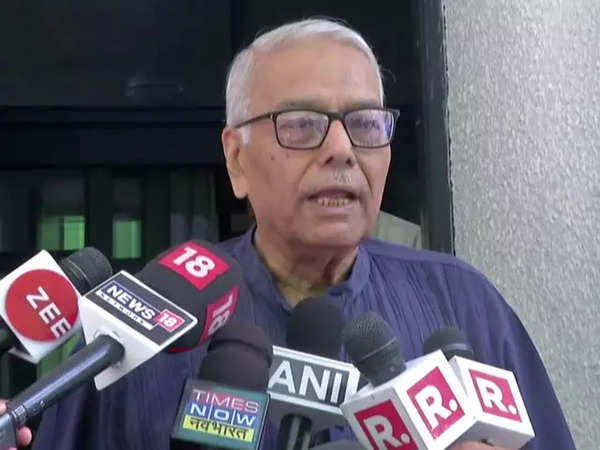 Noida (Uttar Pradesh): Opposition Presidential candidate Yashwant Sinha on Monday urged all the MPs and MLAs to vote for him to save the democracy adding that he is not just fighting a political fight but a fight against government agencies too.

“This election is very important and will set the path for the country’s democracy, whether it will stay or end. I appeal to all voters to listen to their hearts. This is a secret ballot and I hope they will use their discretion and elect me to save democracy,” said Yashwant Sinha.

Targeting the Centre, he also alleged that they have become too powerful that they are breaking up parties, forcing people to vote for them and said that there is also a game of money involved.

“I am not just fighting a political fight but a fight against government agencies too. They have become too powerful. They are breaking up parties, forcing people to vote for them. There is also a game of money involved,” he added.

Punjab’s Leader of Opposition Partap Singh Bajwa said asserted that 99 per cent of the votes from Punjab are going to Yashwant Sinha.

However, BJP’s MLA from Darjeeling Neeraj Tamang Zimba expressed confidence that Droupadi Murmu will emerge victorious in the presidential election.

“This (Presidential poll) is just a formality. She has already won. Statistics say that Droupadi Murmu will become the first tribal woman President of the country. It’s a joyous occasion. There’s support from everywhere. It is historic,” he said.

Minutes ahead of the commencement of voting for the Presidential election, BJP president JP Nadda hailed the candidature of Droupadi Murmu.

“Draupadi Murmu’s candidacy for the highest office is a defining moment for India & the most glorious moment in our quest for social justice and transformation. This is an election for the “People’s President” I have penned a few thoughts,” Nadda said in a tweet.

Earlier, Prime Minister Narendra Modi was among the first to cast his vote in Parliament as voting for the presidential election began on Monday in which NDA candidate Droupadi Murmu is pitted against joint opposition candidate Yashwant Sinha.

Polling began at 10 am at the Parliament House and the state legislative assemblies with MPs and MLAs casting their votes to elect the 15th President of India. The voting process will conclude at 5 pm. Counting of votes is scheduled to take place on July 21.

The Monsoon Session of Parliament commenced today and will continue till August 12.

Price rise, Agneepath scheme and unemployment are some of the issues which are likely to be raised by the Opposition during the Monsoon session.

Various Bills including Family Courts (Amendment) Bill, Forest (Conservation) Amendment Bill, Press and Registration of Periodicals Bill are likely to be taken up in the session.