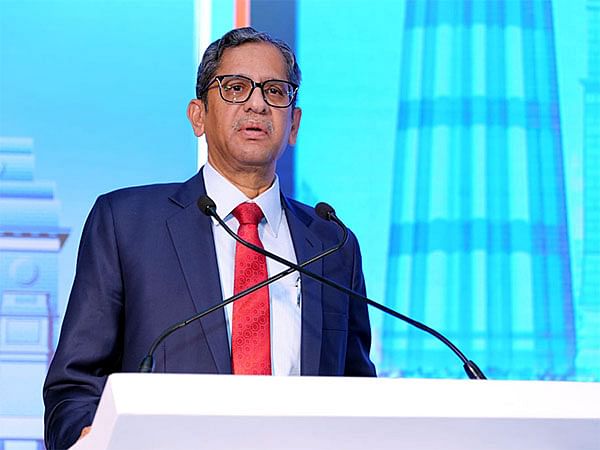 Jaipur (Rajasthan): The Chief Justice of India NV Ramana on Saturday said that in India’s criminal justice system, the process is the punishment and emphasised that from hasty indiscriminate arrests to difficulty in obtaining bail, the process leading to the prolonged incarceration of undertrials needs urgent attention.

Speaking at the 18th All India Judicial Services Authorities Meet at Jaipur, CJI Ramana said, “In our criminal justice system, the process is the punishment. From hasty indiscriminate arrests, to difficulty in obtaining bail, the process leading to the prolonged incarceration of undertrials needs urgent attention. We need a holistic plan of action, to increase the efficiency of the administration of criminal justice. Training and sensitisation of the police and modernisation of the prison system is one facet of improving the administration of criminal justice. NALSA and legal service authorities need to focus on the above issues to determine how best they can help,” said the CJI. He said that in a country like India, legal aid forms a core aspect of the administration of justice.

“Administration of justice is not an act which is accomplished only within the courtrooms. It involves promoting and creating awareness about rights and facilitating social justice. It means creating a platform where parties can claim competing rights. Only when equal access and participation is ensured in the justice delivery system, the faith and trust of all shall be won,” said the CJ

Therefore, access to justice came to be recognised as a fundamental right, as it is the key to defending other rights, he added.

CJI Ramana further explained, “In other words, unless people can access justice, they would be deprived of remedies in case of violation of their rights. A single violation of a right, or a single case, can spiral into graver consequences quickly. An unlawful eviction may not only lead to loss of shelter, it may also lead to loss of livelihood which may result in lack of access to food or healthcare. Without state intervention in such circumstances through legal aid, violators will never be held accountable, and injustice shall prevail.”

Considering the significance of the State’s role in administering justice, the Legal Services Authorities Act was enacted in 1987, nearly 40 years after independence, the Act was considered revolutionary, as it was much ahead of its time, he said.

CJI added that “After initial hiccups, we have now achieved great success. Now, our services have reached every nook and corner of our country. Today almost 80 per cent of our population are eligible to claim benefits under the NALSA Act. In fact, I will not be surprised if NALSA becomes the largest service provider in our country.”

Even the world’s most advanced democracies do not carry out legal aid at such a massive scale as in India, he said.

We are attempting to streamline our services and adopt modern tools and technology while maintaining our original goal and belief, CJI said.

“Today, I am glad to see that two different initiatives for the benefit of the prisoners have been launched. In India, we have 6.1 lakh prisoners in 1,378 prisons. They are indeed one of the most vulnerable sections of our society. Prisons are black boxes. Prisoners are often unseen, unheard citizens. Prisons impact different categories of prisoners, particularly those belonging to marginalised communities. The new initiatives under the E-prisons portal are a step towards transparency and expediency, keeping the interests of the prisoner at the core,” he said.

Now, all relevant information regarding an inmate, such as the details of their incarceration and pending court cases, are just a click away, CJI further said.

CJI Ramana said that another great initiative launched today is that of e-Mulakat.

“Prolonged separation from family and society can have a detrimental impact on the mental health and socialisation of an inmate. Through this initiative, the families and wellwishers of inmates can be in constant touch with them with ease. The eParole application is another great initiative through which inmates can have continuity of social existence and interaction,” he added.