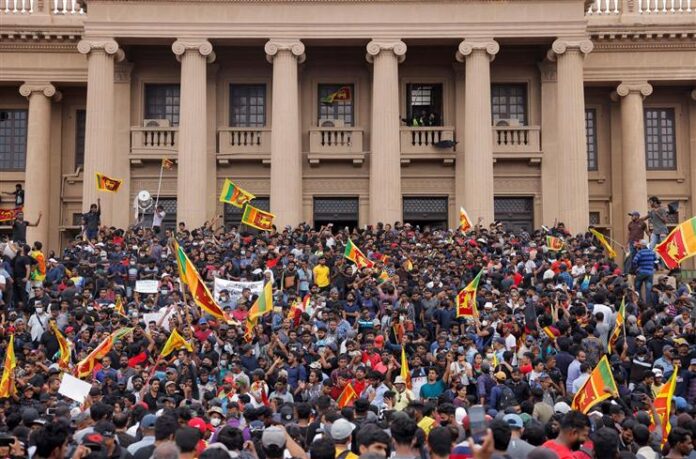 Colombo [Sri Lanka]: Shortly after Sri Lanka’s Parliament Speaker said that he is yet to receive Gotabaya Rajapaksa’s letter of resignation, thousands of protestors took to the street and some of them stormed the Prime Minister’s residence in Colombo demanding the President and Prime Minister Ranil Wickremesinghe to quit.

Dramatic visuals came from Sri Lankan PM’s house where a huge military is present inside the house to prevent the protesters from coming inside the house but failed to do. Even they used tear gas to disperse them.

The protestors are protesting against the Prime Minister who is tipped to be appointed as the acting president.

According to Sri Lankan Constitution, when there is no President, the PM will be appointed as the acting President but the protesters are not happy with this decision and this is the reason they are demanding Wickremesinghe to resign.

Former Advisor to Sri Lankan Foreign Affairs ministry said, “We want the PM to resign because as per our constitution if the President resigns PM becomes the acting President. People want both of them to leave. Police took action by tear gas shelling. Army troops moved in.”

Notably, PM Wickremesinghe is scheduled to be sworn in today as interim President till a new President is elected by Parliament on July 20, and nominations for the presidency will be called for on July 19.

Another protester said, “Ranil Wickremesinghe is a failed prime minister.”

Earlier, Parliament Speaker Mahinda Yapa Abeywardena said has not the resignation letter of the embattled President who departed from Sri Lanka hours before he was expected to resign amid widespread protests in the country which is facing a severe shortage of fuel and other essential supplies.

In an exclusive conversation with ANI, Abeywardena said, “We haven’t received President Gotabaya’s resignation yet, but we hope to get one in a day.”

73-year-old Gotabaya had gone into hiding after crowds of protestors stormed his residence on July 9 and he had announced that he will resign on July 13. Sri Lankan authorities today confirmed that Gotabaya had flown to the Maldives with his wife and two bodyguards after full approval of the country’s Defence Ministry.

Sri Lanka is suffering its worst economic crisis since gaining independence in 1948, which comes on the heels of successive waves of COVID-19, threatening to undo years of development progress and severely undermining the country’s ability to achieve the Sustainable Development Goals (SDGs).