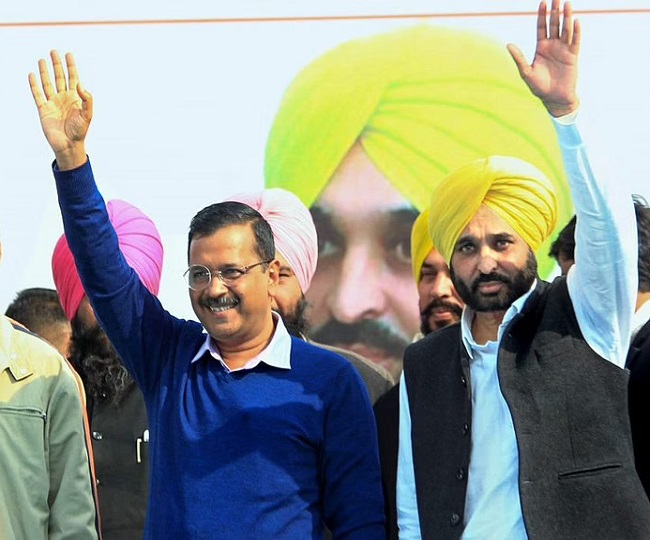 Chandigarh (Punjab): The Aam Aadmi Party government of Punjab is going to expand its first cabinet on Monday. On behalf of the Raj Niwas, the Bhagwant Mann government has been given time at 5 pm on Monday for the oath of new ministers.

Before that, now the discussion of the names of the new ministers is in full swing, which new faces will join the Bhagwant Mann government.

It is worth noting that two days ago, Punjab Chief Minister Bhagwant Mann had reached Delhi to meet the party high command Arvind Kejriwal.

If sources are to be believed, during this meeting, there was also a discussion about the cabinet expansion of Punjab and the names of the possible ministers were also mentioned.

However, on the question of ANI after the meeting of the two, Bhagwant Mann had said that “there was no discussion about cabinet expansion in the meeting with Arvind Kejriwal, we will decide on it in Punjab”.

After this meeting on Friday, news came from Punjab on Saturday that the Bhagwant Mann government is going to expand the cabinet. Now the centre of discussion is who will become the new minister.

This cabinet expansion is going to happen at a time when the Aam Aadmi Party has lost the Sangrur Lok Sabha by-election recently and civic elections are also to be held in Punjab in the coming times.

In such a situation, it is believed that in this cabinet expansion, efforts will also be made to harmonise accordingly.

If sources are to be believed, Dwaba and Majha areas can also be represented in this cabinet expansion, because most of the ministers in the current cabinet of the Bhagwant Mann government are from Malwa area.

According to sources, a total of 5 to 6 new ministers, including a woman MLA, are likely to take oath on Monday.

At present, Dr Baljit Kaur is the only woman minister in the Bhagwant Mann government. Jeevanjot Kaur from Amritsar East and Sarvjit Kaur Manuke from Jagrao are among the names that are being discussed about the new female face.

According to sources, the 5 MLAs who can be made ministers, apart from Aman Arora, MLA from Sunam, Dr. Inderbir Singh Nijjar, MLA from Amritsar South, Fauja Singh Sarari, MLA from Guru Har Sahai, Chetan Singh Joramajra, MLA from Samana, Patiala and Kharar and MLA from Anmol Gagan Mann is involved.

Apart from these, the name of Aman Arora, MLA from Sunam, is in the forefront of the names that are being discussed. It is also believed that the portfolios of some ministers can also be changed.

After winning the assembly elections, apart from CM Bhagwant Mann, a total of 10 ministers were made in Punjab. But among them, after the removal of Health Minister Vijay Singla in the corruption case, there are a total of 9 ministers.

If 5 more ministers are made, then the total number of ministers including the chief minister will become 15.