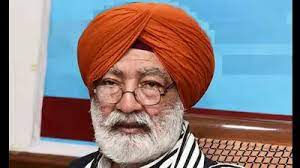 Chandigarh (Punjab): Aiming to unearth the corruption in the Forest Department during the previous Congress regime, the Punjab Vigilance Bureau on Wednesday arrested Daljit Singh Gilzian, nephew of former minister Sangat Singh Gilzian, who was a middleman to collect the ill-gotten money from contractors, in transfers of department officials, illegal mining as well as the purchase of tree guards.

Disclosing this here a spokesperson of the Punjab Vigilance Bureau said that the Bureau has recovered a diary which has several leads to the arrested Daljit Singh. The forest contractor Harminder Singh Hammi had given Rs 5 lakh as a bribe to former Forests Minister Sangat Singh Gilzian through one Kulwinder Singh for issuance of a permit for cutting of Khair trees at village Nada, Mohali district. He had also given bribes to the Range Officer, Block Officer, and Guard of this department.

During his tenure, former minister Gilzian had arranged a meeting of contractors with DFOs in Punjab and had directed that the purchase of tree guards for the protection of plants would only be made by some contractors only.

The cost of one tree guard was Rs 2,800 out of which Gilzian’s share as bribe was Rs 800. Large numbers of tree guards were bought at that time and a huge amount was collected as bribes.

During the tenure of S.S. Gilzian, Amit Chauhan was appointed as DFO, Ropar. At that time illegal mining was carried out on 486 acres of land in village Jinda, near Bela within one month. Around 50-feet deep pits were dug up in the village and Rs 40 to 50 crore worth of illegal mining was carried out in connivance with sarpanches and some other persons.