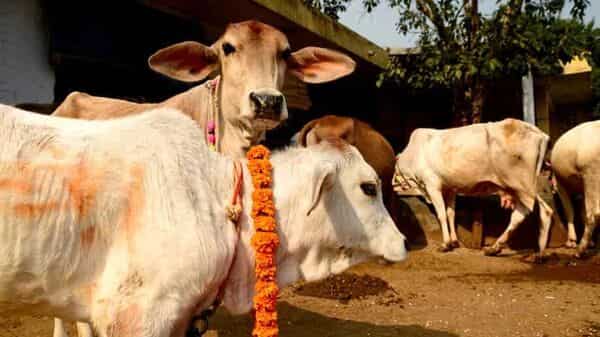 Raipur (Chhattisgarh): The Chhattisgarh government is all set to start purchasing ‘gaumutra’ (cow urine) from ‘Hareli’ festival which is falling this year on July 28.

Chief Minister Bhupesh Baghel will launch this initiative by purchasing ‘gaumutra’ from Gauthan established in village Karsa of Patan block of Durg district. In Raipur district, the purchase of ‘gaumutra’ will start from Gauthans established in Navagaon (L) of Abhanpur block and village Badgaon in Arang block, the Chief Minister’s office informed. The state government started a first-of-its-kind scheme in the country–Godhan Nyay Yojana–two years ago on July 20, 2020, on the auspicious occasion of Hareli. Under this scheme, cow dung is being purchased at the rate of Rs 2 per kg from the cattle rearers. The dung thus purchased is used to produce organic manure on a large scale which is being used by farmers in their fields, thereby promoting organic farming in the state.

The scheme has been recognized by many states across the country. After the success of this innovative scheme, the government has decided to purchase ‘gaumutra’ as well.

The cow urine purchased under this scheme will be used to make pest control products and ‘Jeevamrut’ (liquid organic fertilizer). The move aims to minimize use of expensive chemical pesticides and promote organic farming in the state by making organic pesticides available to farmers at nominal prices.

In addition, it also aims to minimize residue of chemical pesticides in food items which destroys its nutritional value and cause harmful effects on human health. Agricultural scientists suggest that cow urine insecticide is a superior and cheaper alternative to chemical pesticides. Its disease resistance is much higher than chemical pesticides. These pesticides are effective against leaf eating, fruit piercing and stem borer pests.

Notably, Chief Minister Bhupesh Baghel took the initiative of conservation and promotion of local resources to improve the economic condition of farming community and strengthen the rural economy.

In keeping with this spirit, ‘Narva, Garwa, Ghurwa, Bari’ programme was started under ‘Suraji Gaon Yojana’ for recharging streams and drains, protecting and promoting of livestock, promoting organic farming and improving the nutritional level.

Under the ‘Garwa’ program of Suraji Gaon Yojna, Gauthans has been established in 8408 villages of the state where an arrangement of free-of-cost fodder, water and care has been made for the cattle.

In these Gauthans, cow dung is being procured for the last two years under the Godhan Nyay Yojana, using which women groups are preparing organic fertilizers and other products. Over 76 lakh quintals of cow dung has been procured in the state in the last two years, in lieu of which an amount of more than Rs 153 crore has been paid to the beneficiaries.

Women’s groups have prepared more than 22 quintals of organic manure so far including Vermicompost, Super Compost, the Super Compost Plus from the purchased cow dung which has been made available to the farmers of the state. Along with manufacturing of organic manure from cow dung, women are also conducting other income-oriented activities, which have earned them an additional income of Rs 74 crore in the last two years.