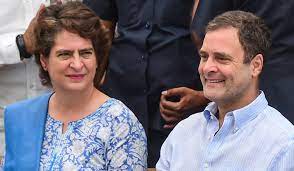 The post-midnight meeting comes after Rahul Gandhi left the Enforcement Directorate office in the national capital after around 14 hours of questioning in connection with the money laundering case involving the National Herald newspaper. The former Congress chief has been summoned by the agency to rejoin the probe against him on June 21, as per sources.

The Lok Sabha member from Wayanad in Kerala arrived at ED headquarters at around 11.10 am on Monday accompanied by his sister Priyanka Gandhi.

Rahul Gandhi was questioned by the ED for over 27 hours for three straight days from June 13 to June 15. The Congress leader was deposed before the ED investigators in the case for the first time on June 13.

He first sought exemption from appearance on June 16, following which he was called on June 17. But the senior Congress leader wrote to the ED to postpone his questioning citing the illness of his mother Sonia Gandhi. The ED then allowed him to join the probe on June 20 at his request.