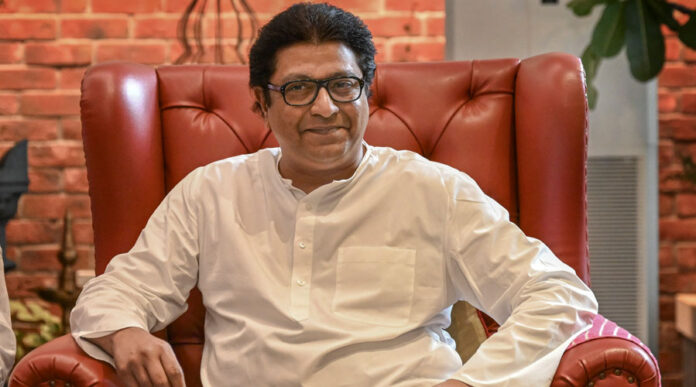 Mumbai (Maharashtra): Maharashtra Navnirman Sena chief Raj Thackeray has extended his best wishes to BJP leader Devendra Fadnavis for being sworn in as the deputy chief minister of the state, further praising him for accepting the junior slot in the government following the order of the party high command despite him being a two-time chief minister.

Notably, Fadnavis had initially denied being a part of the new government and had said that he would support the government from outside. However, on the word of the party high command, he accepted to join the government as a deputy. Thackeray denied calling it a “demotion” of Fadnavis stating that it has been done to with an aim to meet a target.

Taking to Twitter, the MNS chief tweeted, “I won’t say anything about you being appointed the deputy chief minister as a promotion or demotion, I would only say this that when a target is to be aimed, the rope of the bow is pulled back with the arrow to hit the target. And this is not considered a demotion.”

Thackeray also extended best wishes to Eknath Shinde for being sworn in as the Chief Minister and also cautioned him asking him to “take measured steps”.

“My heartfelt congratulations to you on being sworn in as the Chief Minister of Maharashtra. It is indeed a moment of happiness for us. Providence has given you this opportunity. I hope you will prove it with your confidence. Be alert. Take measured steps,” he tweeted.
He also had taken a veiled jibe at Uddhav Thackeray during the Maharashtra crisis saying that “When anyone misunderstands good fortune as one’s personal accomplishment, therein begins the journey of one’s decline”.

Though Raj Thackeray has not named Uddhav, however, the timing of the tweet gave an indication of the reference to his brother.

Shiv Sena president Uddhav Thackeray on Friday removed Eknath Shinde who revolted against him and succeeded him as the new Maharashtra Chief Minister from the post of Shiv Sena leader.

Shinde has been removed for indulging in “anti-party activities”, said a Shiv Sena statement.

The political crisis in Maharashtra was created by a revolt in Shiv Sena led by Shinde who stayed in Guwahati with other MLAs supporting him. Uddhav Thackeray resigned on Wednesday.

Earlier on Friday, former Maharashtra Chief Minister Uddhav Thackeray lashed out at the BJP for giving the Chief Ministerial slot to Eknath Shinde, a rebel Shiv Sena leader, and said that had the former ally partner agreed to this earlier, there would have been no Maha Vikas Aghadi in the state.

The Shiv Sena and BJP had parted ways after the 2019 Assembly elections in the state after the former demanded 2.5 years of Chief Ministership each for both the parties during the term of five years, which the latter had not agreed to. Shiv Sena had then stitched an alliance with rival NCP and Congress to form the government.

Talking about the swearing-in ceremony of Shinde who was appointed as the Chief Minister and Devendra Fadnavis who was sworn in as his Deputy, Thackeray said, “About what happened yesterday, I had told Amit Shah earlier as well that there should be a Shiv Sena CM for 2.5 years (during Shiv Sena-BJP alliance). Had they done this earlier, there would have been no Maha Vikas Aghadi.”

Hitting out at Shinde, who led the revolt against him for over a week which culminated in the resignation of Thackeray from the office, the Shiv Sena chief said that the new CM is not from his party which the BJP has aimed at making. He said that he had told Union Home Minister Amit Shah in 2019 about the distribution of the Chief Ministerial post for 2.5 years each.

“The manner in which government has been formed and a so-called Shiv Sena worker has been made CM, I had said the same to Amit Shah. This could have been done respectfully. The Shiv Sena was officially with you (at that time). This CM (Eknath Shinde) is not a Shiv Sena CM,” Thackeray said.