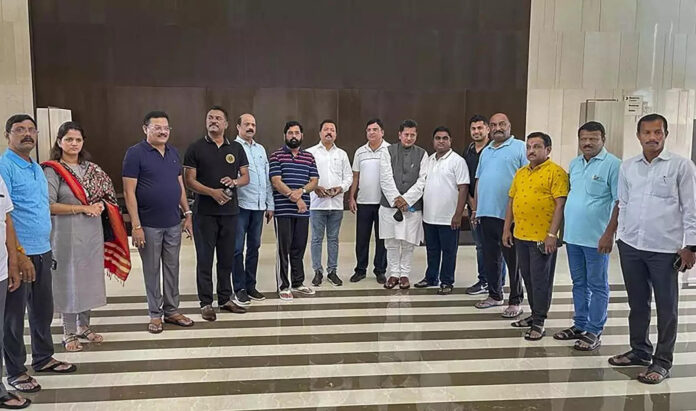 Guwahati (Assam): The Eknath Shinde camp stationed in a Guwahati hotel, which was scheduled to leave the city and reach Goa by this evening, has rescheduled its departure owing to the Supreme Court hearing a plea at 5 pm filed by Shiv Sena challenging Maharashtra Governor Bhagat Singh Koshyari’s notification to conduct a Floor test tomorrow.

The Governor has issued direction to Chief Minister Uddhav Thackeray to prove his majority support on the floor of the House on June 30.

Due to the hearing taking place in the evening, the rebel MLAs who were supposed to reach Goa by the evening, will now be departing from Guwahati at around 7 pm, according to the sources.

Speaking to the media, Eknath Shinde said that they have the two-thirds majority and there is nobody who can stop them.

“We will reach Mumbai tomorrow. 50 MLAs are with us. We’ve 2/3 majority. We are not worried about any floor test. We will pass all things and no one can stop us. In democracy majority matters and we’re having that,” he said.

Shinde also reached the Kamakhya temple along with other rebel MLAs.

Earlier today, Koshyari asked the Uddhav Thackeray government in the state to prove his majority on the floor of the House on June 30 citing that the “present political scenario” unfolding in the state paints a “very disturbing picture.”

The Governor has written to the state Assembly secretary to convene a special session of the State Assembly tomorrow with the only agenda of a trust vote against CM Thackeray.

According to the notification, the session will commence at 11 am which will also be telecast live.

Notably, this comes after Leader of Opposition and former chief minister Devendra Fadnavis visited the Governor on Tuesday night after returning from Delhi, and submitted a letter to him demanding an immediate floor test.

“The present political scenario unfolding in the State of Maharashtra paints a very disturbing picture. There has been extensive coverage in the electronic and print media that 39 MLAs of the Shiv Sena Legislature Party have expressed their sincere desire and decision to exit the Maha Vikas Aghadi Government,” said the notification by the Governor.

“In this backdrop, an email dated June 28, 2022, was received by Raj Bhavan, Mumbai by 7 independent MLAs. The said letter states that the Chief Minister of Maharashtra has lost the confidence of the majority on the floor of the House thereby, making it imperative to conduct a floor test at the earliest,” the notification stated.

“As the constitutional head of the State. I must ensure that the Government functions with the support and confidence of the House. Thus, I have issued a communication to the Chief Minister calling upon to prove his majority on the Floor of the House on June 30, 2022,” it further stated.