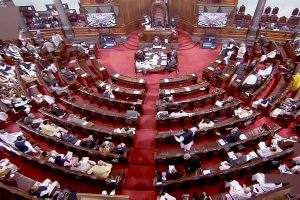 New Delhi [India]: As soon as the second day of the Monsoon Session commenced, the Rajya Sabha (RS) was adjourned till 2 pm amid protests and sloganeering by the opposition parties over inflation and GST rate hikes.

Meanwhile, the Lower House of the Parliament has been adjourned till 2 pm amid sloganeering by Opposition MPs on issues of price hikes and inflation.

Lok Sabha Speaker Om Birla prior to adjourning the House proceedings till 2 pm said, “As per rules, it is not allowed to bring placards inside the House.”

The Monsoon Session of Parliament will commence on Monday and will continue till August 12. There will be 18 sittings during the Session.

The day one of the Rajya Sabha (RS) had also witnessed a ruckus created by the Opposition party members following disruption in Rajya Sabha proceedings, leading to the adjournment of the House for the entire day.

A Joint Opposition including Congress, Aam Aadmi Party and Shiv Sena created ruckus at the pandemonium in the House after oath affirmation and obituary references.

Opposition MPs protest in the Upper House (RS) and walk up to the Well of the House over inflation and increase in GST of some essential commodities.

The Opposition members raised issues while interrupting the ongoing speech of the Rajya Sabha Chairman.

Price rise, the Agnipath scheme and unemployment are some of the issues which are likely to be raised by the Opposition during the Monsoon session.

During the session, the central government will seek to push several legislations and its legislative agenda includes 32 bills for passage – out of which 14 are ready.

The bills include the cantonment bill, multi-state cooperative societies bill, development of enterprises and services hubs bill, two separate bills for Constitution amendment to revise the list of Scheduled Castes (SCs) and Scheduled Tribes (STs) for Chhattisgarh and Tamil Nadu, among others.

In addition to this, some pending bills will also be taken up. Some of the bills that are in the pending list include The Indian Antarctica Bill, 2022, the Inter-State River Water Disputes (Amendment) Bill, 2019.

The Monsoon Session of Parliament commenced on July 18 and will continue till August 12. There will be 18 sittings during the Session.