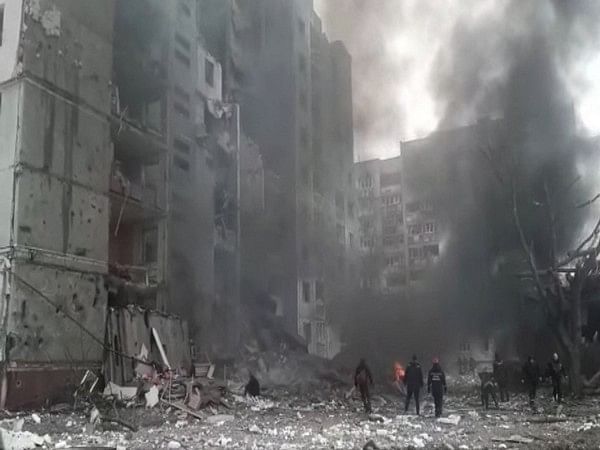 Kyiv [Ukraine]: Russian troops bombarded the Chuhuiv town in Ukraine’s Kharkiv region as a result of which two persons sustained injuries while many others were suspected buried under rubble, Ukrainian officials claimed.

Several civilians were still hiding in the basement of a cultural centre that was destroyed during the attack, Kharkiv Police’s investigative unit head said according to a media report. Three people had already been rescued from the rubble, Regional Governor Oleh Synyehubov said as quoted by Al Jazeera.

Synyehubov said the residential areas in the village of Korobochkyne and the town of Pechenihy were also bombarded several times.

He also reported a fire in one of the wheat fields in the area.

The regional governor said the towns of Bohodukhiv and Izyum were also bombarded.
“Unfortunately, in the village Kulynychi, a 39-year-old tractor driver was killed after he ran over an explosive object,” Synyehubov said.

“We once again appeal to the farmers of the Kharkiv region: remember the danger. You can work in the fields only after an examination with explosives and military personnel,” he added.

The latest round of Russian attacks come a day after a Ukrainian official said that the country’s southern region of Kherson, which was captured by Russian troops during their early military operation in February, would be taken back by Kyiv’s forces by September.

The Ukrainian army, emboldened by deliveries of western-supplied long-range artillery has been clawing back territory in the southern Kherson region in recent weeks, Al Jazeera reported.

Meanwhile, the Russian defence ministry clarified that it had attacked a cargo of US-supplied Harpoon anti-ship missiles and a military boat in Ukraine’s Odesa. According to Al-Jazeera, Russia had earlier denied attacking the Ukrainian port.

The attack on the southern port took place on Saturday, a day after a deal was signed to unblock grain exports from Black Sea ports and ease food shortages caused by the war, Al- Jazeera reported.

Serhii Bratchuk, a spokesman for the Odesa military administration, claimed two missiles hit the infrastructure of the port while another two were shot down by Ukraine’s air defence. At least six explosions were heard in Odesa, according to Ukrainian member of parliament Oleksiy Goncharenko.

On February 24, Russia began a “special military operation” in Ukraine after the Donetsk and Luhansk people’s republics requested help in defending themselves.

The Russian Defence Ministry said the special operation is targeting Ukrainian military infrastructure only and the civilian population is not in danger.