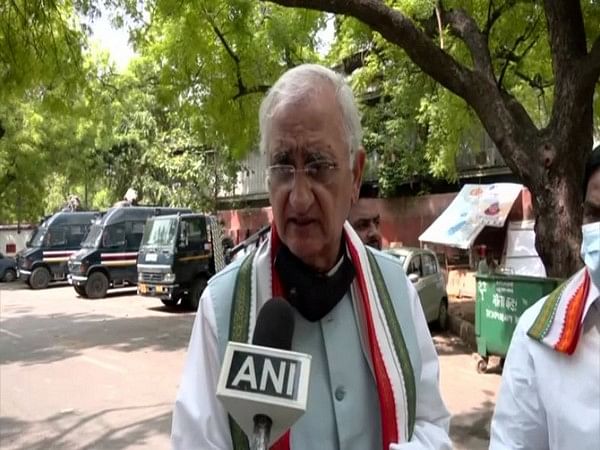 New Delhi [India]: Amid the row over the Centre’s newly-launched Agnipath scheme, senior Congress leader and former union minister Salman Khurshid on Monday questioned the “character” of the Armed Forces, doubting their intention behind bringing the scheme.

“We would not have any problem if those for whom the scheme is made were satisfied. But, the irony is those for whom the scheme is made are not satisfied. They are upset. So far there is an outcry against the scheme, it is our responsibility to raise the issue. This is now not only a matter of the youth but the character of the Armed Forces is also under question. It is a matter of grave concern for us,” Khurshid said. Asked about Enforcement Directorate’s probe against Rahul Gandhi, the Congress leader said, “Maybe ED does not have any work to do that is why the agency calls Rahul Gandhi every day.”

Congress leaders, including Mallikarjun Kharge, Salman Khurshid, K Suresh, V Narayanasamy and others, are holding a ‘Satyagraha’ at Jantar Mantar to protest against the Enforcement Directorate summons to Rahul Gandhi and Agnipath scheme.

As the protests continue, the Twitter handle of the Congress party on behalf of Rahul Gandhi wrote, “People who make false promises of providing employment to two crore youth every year, are forcing the youth of the country to walk on the ‘firepath’ of unemployment. The situation is deteriorating all around the country at this time, only and only the Prime Minister is responsible for it.”

Mallikarjun Kharge also lashed out at the Centre over the Agnipath scheme. He tweeted today, “For the first time in 75 years, service chiefs are being fronted to defend a policy decision by the government. Why are the Prime Minister, Home Minister and Defence Minister quiet on the Agnipath scheme?”

Over 80 trains have been cancelled and massive traffic jams are being witnessed across Delhi-NCR on Monday as some organisations have called for a “Bharat Bandh” to mark their protest against the Agnipath recruitment scheme unveiled by the Central government last week. This comes a day after Tri-service chiefs ruled out the withdrawal of the scheme.

The commuters in the national capital experienced difficulties in commuting as heavy traffic jams were reported in various parts of the city including at the Delhi-Gurugram expressway as Delhi Police installed barricades at various checkpoints in wake of the Bharat Bandh against the Agnipath Scheme.

Precautionary measures are being taken at various railway stations in many states as several stations were vandalised and many trains were set ablaze by agitators.