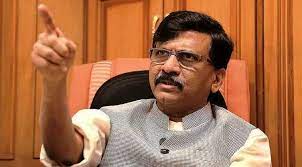 “Threats are being given to Sharad Pawar ji by a Central minister. Do such threats have the support of Modi Ji and Amit Shah Ji?” said Raut. The Shiv Sena leader further said that this is a matter of concern and the Home Minister and PM Modi should pay attention to this.

Raut’s statement came after Union minister and BJP leader Narayan Rane posted a series of tweets last evening alleging that Pawar was threatening rebel Shiv Sena MLAs and if anything happened to them in the state Assembly, there will be consequences.

Sharad Pawar is threatening the (rebel) MLAs that they should come to the Maharashtra Legislative Assembly. They will definitely come and vote as per their will. If any harm comes to them, it will be difficult to go home,” Rane tweeted in Marathi.
Earlier in a tweet, Raut has said that the use of such language against the NCP chief is not acceptable.

“A central minister of the BJP has said that if attempts are made to save MVA govt, then Sharad Pawar will not be allowed to go home. Whether or not the MVA govt survives, use of such language for Sharad Pawar is not acceptable,” tweets Shiv Sena leader Sanjay Raut.
Meanwhile, Raut has warned Ekanth Shinde-led rebel MLAs and said that if needed ‘Shiv Sena workers will come on the roads.

“Shiv Sena is a big ocean such waves come and go,” he added.
However, refuting the claims of Raut, MoS Railways and BJP leader Raosaheb Patil Danve said that this is an internal matter of the Shiv Sena and BJP is not trying to destabilise the government.

“No Central minister is giving threats. BJP is not trying to destabilise the government. This is an internal matter of the Shiv Sena. BJP is only in wait and watch position,” said Danve.
On the other hand, Shiv Sena on Friday called a meeting of the party leaders including district presidents and chief district coordinators as a confidence-building measure.
The meeting will be chaired by Chief Minister Uddhav Thackeray at Shiv Sena Bhawan in Mumbai at 12 pm.

Eknath Shinde is appearing to be holding a tight grip on the Shiv Sena, as the strength of MLAs supporting him is expected to cross 50 as more legislators are likely to reach Guwahati on Friday thus further deepening the political crisis in Maharashtra.

The situation for Thackeray continues to become grimmer with his close aide switching sides and the chief minister himself falling short of numbers.

It seems that the legacy of Bal Thackeray, who founded Shiv Sena, has slipped from the hands of Uddhav Thackeray with the rebellion of Eknath Shinde as he claims of being a true Shivsainik, the battle of who holds the true legacy of Balasaheb has started.