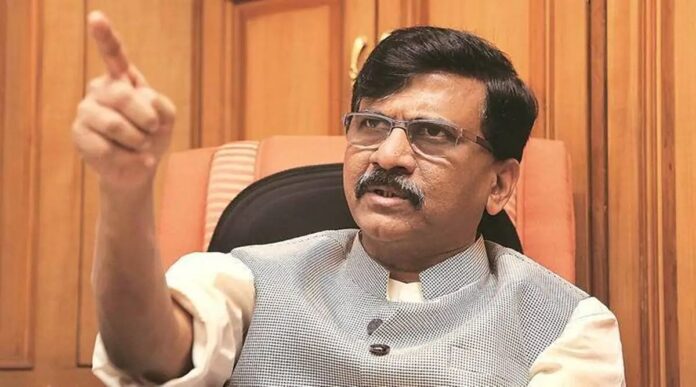 Mumbai (Maharashtra): Shiv Sena MP Sanjay Raut on Tuesday alleged that his party MLA Nitin Deshmukh was kidnapped from Mumbai and claimed he is in the BJP’s control in Gujarat’s Surat, where reportedly a total of 22 Shiv Sena MLAs are camping.

He further alleged that Deshmukh was brutally beaten up by Gujarat Police. “MLA Nitin Deshmukh is in BJP control in Surat. He was kidnapped from Mumbai. On Monday night, he tried to free himself. Then he was brutally beaten up by the Gujarat Police and goons. The goons of Mumbai are also there. Violence on Gujarat soil?” Raut said in a tweet.
Earlier, Raut had said that over 15 Shiv Sena MLAs have become “unreachable”.

According to sources, a day after suspected cross-voting in Maharashtra MLC polls, prominent Shiv Sena leader and state cabinet minister Eknath Shinde has reportedly gone inaccessible with several party MLAs. Sources said the MLAs moved to a hotel in Surat in Gujarat.

According to the reports, a total of 22 MLAs are with Shinde in Surat’s Le Meridien hotel.
Earlier, a Shiv Sena delegation comprising Chief Minister Uddhav Thackeray’s close aides Milind Narvekar and Ravindra Phatak met party leader Eknath Shinde and other legislators in Surat.

Narevekar and Phatak were not allowed to enter the hotel premises on Tuesday afternoon. However, after waiting for nearly half an hour, they were allowed to go inside the hotel.
Meanwhile, Shinde in a tweet today indicated that he has decided to part ways with Shiv Sena.

In a tweet in Marathi, Shinde said, “We are Balasaheb’s staunch Shiv Sainiks … Balasaheb has taught us Hindutva. We have never and will never cheat for power regarding Balasaheb’s thoughts and Dharmaveer Anand Dighe Saheb’s teachings.”

Shinde has also dropped “Shiv Sena” from his Twitter bio.

Sanjay Raut also confirmed the developments and said, “Some MLAs of Shiv Sena and Eknath Shinde are currently not reachable. Efforts are being made to topple the MVA government but BJP has to remember that Maharashtra is very different from Rajasthan or Madhya Pradesh.”

“I know Eknath Shinde Ji, he is a true Shiv Sainik. He will return without any conditions. I have heard that our MLAs are in Surat, Gujarat and they are not being allowed to leave. But they will certainly return as all of them are dedicated to Shiv Sena. I trust that all our MLAs will return and everything will be fine,” Raut had stated.

Raut said that the party is in touch with the inaccessible MLAs. Discussions are also underway with Chief Minister Uddhav Thackeray and Nationalist Congress Party (NCP) chief Sharad Pawar.

“We are in touch with our MLAs who are in Surat now. We are discussing the situation with Uddhav Thackeray Ji and Pawar Sahib. Those working with the thought that they are kingmakers will be unsuccessful,” he had added.

Shinde is a big shot in Shiv Sena and has been instrumental in strengthening the organisation in the Thane region.

Shinde was made the Leader of the Opposition in the Maharashtra Legislative Assembly in 2014 after the Shiv Sena parted ways with the BJP. He was appointed as a cabinet minister in the MVA government.

IMD Predicts Heavy Rainfall For Odisha For Next Five Days