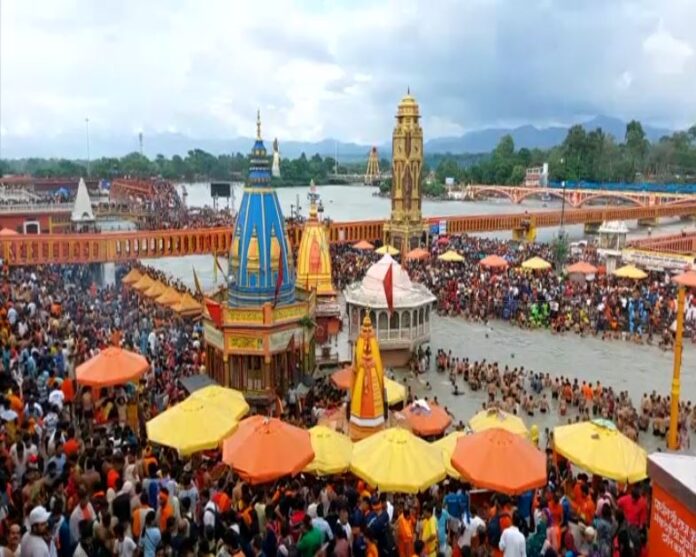 Considered to be the most auspicious day of the holy month of Sawan, people offered prayers to Lord Shiva and performed ‘Jalabhishek’ ie offer holy water to Shivalingam.

Coming from different parts of the country, the devotees fetch Ganga water from sacred places in the country, including Gaumukh, Rishikesh, Haridwar and Gangotri in north India.

Shivratri is observed on the Chaturdashi of every month which is called Masik Shivratri.

This year, the Sawan Shivratri is on July 26.The devotees thronged the Shiva temples of Haridwar to perform Jalabhishek of Lord Shiva as the Shivaratri of Sawan month is being celebrated after two years of the pandemic, while the police administration has made tight security arrangements.

Also, while Sawan Shivratri falls on Tuesday, Mangala Gauri fast is also being observed on the same day.

Goddess Parvati, as well as Lord Shiva, are worshipped as on this day. The devotees engrossed in the devotion to Lord Shiva at the temple–chanted Bam-Bam-Bam-Bhola, a chant dedicated to Lord Shiva.

Devotees coming to perform Jalabhishek in the Daksheshwar Mahadev temple located in Kankhal say that the month of Sawan is the most beloved month of Lord Shiva.

While another devotee Manju Sharma said that all wishes are fulfilled as it’s believed that the lord himself resides in the region for the month of Sawan.

Shravan, the fifth month in the Hindu calendar, is considered to be the most auspicious month of the year. It is dedicated to Lord Shiva who, according to Hindu religious beliefs, is the creator, preserver, and destroyer of this universe.

While Lord Shiva is worshipped on Mondays throughout the year, Mondays during this particular month are considered highly significant and auspicious. The festival is celebrated predominantly in the North Indian states.

It is believed that on ‘sawan ke somwar’ (Mondays falling in the month of Shravan), devotees observe a special fast and visit Shiva temples.

Coming from different parts of the country, the devotees fetch Ganga water from sacred places in the country, including Gaumukh, Rishikesh, Haridwar and Gangotri in north India.

The ‘Kanwar Yatra’ is an annual pilgrimage for Lord Shiva’s devotees. The Kanwariyas visit places like Haridwar, Gaumukh and Gangotri in Uttarakhand and Sultanganj in Bihar to fetch the holy water of River Ganga and then worship the God with the same water.

Considering that Kanwar Yatra did not take place for the last two years, the administration in various areas has been adopting all the necessary measures to avoid any untoward incidents during the holy pilgrimage.