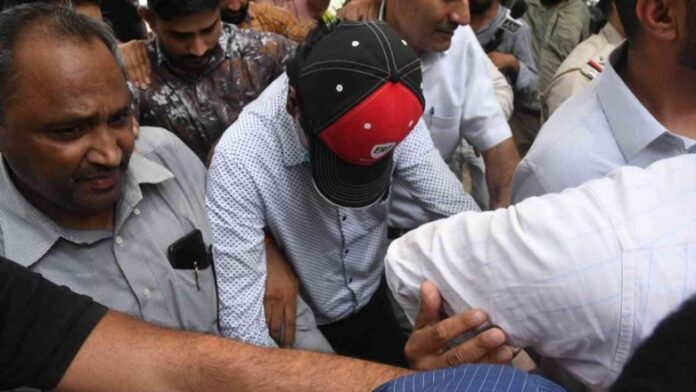 New Delhi [India]: The Supreme Court on Tuesday extended the interim bail granted to the fact-checking website Alt News co-founder Mohammad Zubair in the case registered against him by Uttar Pradesh Police in Sitapur.

A bench of Justices DY Chandrachud and AS Bopanna posted the matter for hearing on September 7 and also granted four weeks to the Uttar Pradesh government to file a response on Zubair’s plea.

Senior advocate Colin Gonsalves, representing Zubair, told the bench that his interim bail was only for five days and is expiring today.

To this, the bench said that it will continue the interim bail of Zubair.

“State seeks time to file a counter-affidavit. Reply to be filed within 4 weeks and rejoinder within 2 weeks thereafter. Interim bail in the Sitapur FIR case shall continue. List for final disposal on September 7, 2022,” the bench stated in its order.

Zubair has challenged the Allahabad High Court order refusing to quash an FIR registered against him by Uttar Pradesh police in Sitapur for a tweet in which he allegedly called three Hindu seers ‘hate mongers’.

Last week, the apex court granted interim bail for five days to Zubair in the FIR registered against him in Sitapur.

The top court had made it clear that the interim bail order was only with respect to FIR lodged in Sitapur against Zubair and it has nothing to do with the case registered in Delhi.

Imposing conditions on bail, the apex court had said that he shall not tamper with electronic evidence in Bangalore or anywhere else.

He shall not tweet regarding the case, the bench had said. It had also made it clear that this order will also not impede the investigation, seizure of evidence in the Sitapur case.

The Delhi court had sent Zubair to judicial custody in a case registered by the Delhi police for allegedly hurting religious sentiments over a tweet posted by him in 2018.

During the last week’s hearing, Solicitor General Tushar Mehta opposed Zubair’s plea and said that it is not about one tweet.

“Whether he is part of a syndicate which is regularly posting such tweets with the intention to destabilise the country. There is something more than what meets the eye in this case. There are many facts suppressed and he says he runs a fact-checking website,” SG had said.

“There is some kind of money angle too. Whether donations from countries inimical to India have been received by them is under investigation,” he had told the bench.

The Solicitor General had said that one isolated tweet is not the offence, his overall conduct is being criminally investigated and he is a habitual offender.

ASG SV Raju had said that whether there is an intention or not of outraging religious sentiments it is the scope of the investigation.

ASG had further said that a prima facie case is made out under 295A (deliberate and malicious act intended to outrage religious feelings) and 153A (promoting enmity between different groups on grounds of religion, race, place of birth, language, etc.) against Zubair and it’s not a fit case for entertaining this application.

Senior advocate Colin Gonsalves for Zubair had said that if he is performing the role of pointing out hate speech and reporting to police, it is not promoting enmity between religions, he is promoting secularism in fact. He is telling them to stop promoting enmity, stop hate speech, Gonsalves added.

Gonsalves had said Zubair’s life is in danger and that is why he moved to the court.

Gonsalves had also referred to some Twitter threat where he said there is a statement to “directly shoot him” and Rs 1 lakh reward has been announced.

Zubair had approached the top court challenging the Allahabad High Court’s June 10 order where it had refused to quash an FIR registered against him in Sitapur, Uttar Pradesh saying that it was premature to interfere when the investigation was at a preliminary stage.

His appeal in the apex court had said that the allegations of the FIR against him are “absolutely false and baseless”.

He claimed to be innocent and said he said that he has not committed any offence.

“The police’s threatening to arrest the petitioner (Zubair) and the life and liberty of the petitioner is in danger. The inclusion of this criminal offence in the FIR portrays the cavalier, malicious and arbitrary manner in which the Respondents (UP police) have acted against the Petitioner,” the appeal stated.

It further stated, “There is a new strategy afoot of the police in communal crime cases. That is to register FIRs against those engaging in hate speech and communal crimes, as well as to rope in all secular elements monitoring such crimes and protesting police inaction against the wrong doers. This is done with the intention of stifling freedom of speech of secular persons in society who stand up against communal elements and to put fear into them so that they no longer protest. It is therefore imperative that this Court understand this new strategy and nip it in the bud so that secular social activism continues on its path and plays the most necessary role in society to stand up to communalism.”