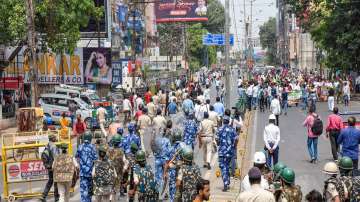 Ranchi (Jharkhand): All schools in Jharkhand will remain closed on Monday in the wake of the “Bharat Bandh” called by some organisations against the Agnipath recruitment scheme launched by the Central government last week.

Security personnel have been deployed at various locations in Ranchi amid protests against the Army recruitment scheme. “JAC exams for class 11 were scheduled for today. New dates will be announced for today’s exams,” Sister Mary Grace, Principal, Ursuline Convent School and Inter College said.

As the agitation intensified in some places, protestors went on the rampage setting trains on fire, torching vehicles and damaging both private and public properties.
Congress will also hold “peaceful” protests across the country on Monday against the “anti-youth” Agnipath recruitment scheme.

Several organisations will stage protests against the Agnipath scheme at Jantar Mantar in the national capital today. Delhi Environment Minister Gopal Rai too will join the protest.

Meanwhile, police in several states have announced measures and tightened security for June 20 protest. In Delhi’s neighbouring areas Faridabad and Noida, Section 144 of the Code of Criminal Procedure (CrPC), which prohibits the assembly of four or more persons, has been imposed.

Uttar Pradesh Police said that strict action will be taken against those found involved in jeopardising peace.

“Amid protests against Agnipath Scheme, anti-social elements may jeopardise peace. Section 144 imposed in Gautam Buddha Nagar and strict action will be taken against those found involved in such incidents,” said Ashutosh Dwivedi, ADCP, Law and Order, Noida.

All schools in Bihar’s Muzaffarpur will also remain shut, as per the order by the district administration.

‘No Discussions With BJP On Ministerial Posts So Far’, Says Eknath Shinde