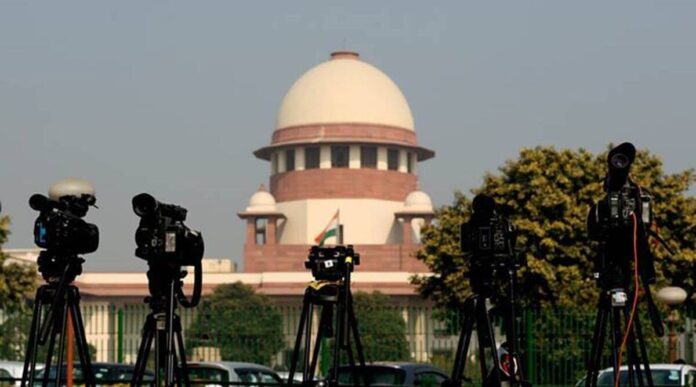 New Delhi [India]: A group of retired judges, bureaucrats and armed forces on Tuesday sent an open letter to Chief Justice of India (CJI) NV Ramana condemning the observation made by the bench of Justices of Supreme Court for “surpassing the Laxman Rekha” while hearing former BJP spokesperson Nupur Sharma’s case in the Supreme Court, terming the remarks as “unfortunate and unprecedented”.

The letter stated: “We, as Concerned Citizens, do believe that the democracy of any country will remain intact till all the institutions perform their duties as per the constitution. Recent comments by the two judges of the Supreme Court have surpassed the Laxman Rekha and compelled us to issue an open statement.”

The Supreme Court on Friday came down heavily on suspended BJP spokesperson Nupur Sharma stating that her outburst is responsible for an unfortunate incident in Udaipur, where a tailor was murdered.

The apex court further blamed the suspended BJP leader and said that she and “her loose tongue” has set the entire country on fire and she is single-handedly responsible for what is happening in the country and said she should “apologise to the whole country”.

Responding to the Supreme Court order, the group said, “Unfortunate and unprecedented comments emanating from the two Judge Bench of the Supreme Court-Justice Surya Kant and Justice J. B. Pardiwala, while being seized of a petition by Nupur Sharma, have sent shockwaves in the country and outside. The observations, simultaneously relayed by all news channels in high decibel, are not in sync with judicial ethos. By no stretch these observations, which are not part of the judicial Order, can be sanctified on the plank of judicial propriety and fairness. Such outrageous transgressions are without parallel in the annals of Judiciary.”

They said that the observations that “have no connect jurisprudentially with the issue raised in the petition, transgressed in an unprecedented manner all canons of dispensation of justice.”

“Perceptionally the observations- Nupur Sharma is adjudged with severity guilty in a proceeding where this was not an issue at all – Reflection-she is “single-handedly responsible for what is happening in the country” has no rationale. By such observation perceptionally there is a virtual exoneration of the dastardliest beheading at Udaipur in broad daylight. The observations also graduate to most unjustifiable degree that this was only to fan an agenda,” the letter reads.

They further said that the legal fraternity is bound to be surprised and shocked at the observation that an FIR should lead to arrest adding that the observations on other agencies in the country, without notice to them, are indeed worrisome and alarming.

“In the annals of the judiciary, the unfortunate comments have no parallel and are an indelible scar on the justice system of the largest democracy. Urgent rectification steps are called for as these have potentially serious consequences on democratic values and the security of the Country. Emotions have flared up extensively on account of these observations that in a sense dilute the barbaric dastardly beheading in broad daylight in Udaipur – a case under investigation. The observations, judgmental in nature, on issues not before the Court, are crucification of the essence and spirit of the Indian Constitution.

Forcing a petitioner by such damning observations, pronouncing her guilty without trial, and denial of access to justice on issue raised in the petition, can never be a facet of a democratic society,” the group wrote.

They said a rational mind is bewildered not only at the jurisprudential transgressions but also the sweep of the same as Judges hit out no holds ‘barred’ at agencies and making innuendo reflections about her “clout”.

The observations are too serious to be overlooked if rule of law, democracy has to sustain and blossom and deserve to be recalled with stance that soothes minds that care for justice, the group added.

Notwithstanding the unwanted, unwarranted and uncalled for verbal observations of the Judges of the Apex Court, there is another crucial aspect of the matter.

The group said that the petitioner had approached the Supreme Court for the transfer of various FIRs registered against her in different States in respect to the alleged remarks made by her during a TV debate.

“The allegations constitute only one offence for which separate prosecutions (FIRs) were launched. Article 20 (2) of the Constitution of India prohibits prosecution and punishment more than once for the same offence. Article 20 falls under Part III of the Constitution and is a guaranteed fundamental right. The Hon’ble Supreme Court in a number of cases including Arnab Goswamy vs. Union of India (2020) and TT Anthony vs. State of Kerala clearly laid down the law that there can be no second FIR and consequently there can be no fresh investigation in respect to the second FIR on the same issue. Such an action is violative of fundamental rights as guaranteed under Article 20(2) of the Constitution of India,” the letter reads.

“One fails to understand, why Nupur’s case is treated at a different pedestal. Such an approach of the Hon’ble Supreme Court deserves no applause and impacts the very sanctity and honour of the Highest Court of land,” they added.