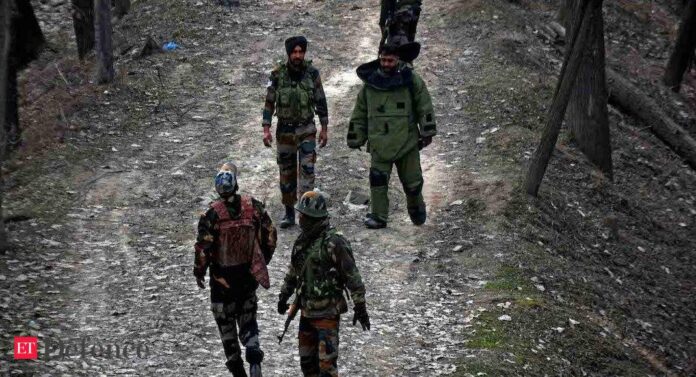 The official said a bomb disposal squad (BDS) has been called to the site and the vehicular traffic along the road has been suspended till further orders.

“Security forces find a suspicious object believed to be an IED at Kutta Mod Pattan in north Kashmir’s Baramulla District. A BDS team has been called to the site and vehicular traffic along the road has been suspended till further order,” Indian Army said.

Meanwhile, in the early hours of Wednesday, two local terrorists surrendered on the appeal of their parents and the security forces after an encounter broke out at the Hadigam area of Jammu and Kashmir’s Kulgam district.

Acting on information about the presence of terrorists, a joint team of Army, CRPF and J-K Police launched a cordon-and-search operation in the Hadigam area of the district.

“#Encounter has been started at Hadigam area of #Kulgam. Police and security forces are on the job. Further details shall follow,” the police had tweeted earlier today.

Earlier on Sunday, villagers nabbed Talib Hussain and Faisal Ahmad Dar – two most wanted Lashkar-e-Taiba (LeT) terrorists from Tukson Dhok village in Reasi district and handed them over to police.

According to Jammu and Kashmir Police, the terrorists had reached Tukson Dhok village to take shelter after continuous pressure from Police and Army. They have been identified as Talib Hussain of Rajouri and Faisal Ahmed Dar of Pulwama.

Police recovered two AK rifles, seven grenades, a pistol and a huge quantity of ammunition from their possession.

Police said Talib Hussain was in constant touch with LeT terrorist Qasim based in Pakistan and was involved in at least three cases of IED blasts in Rajouri district besides killings of civilians and grenade blasts.

During preliminary questioning, it was revealed that both the terrorists were also in touch with a Pakistani LeT handler Salman who was continuously in touch with them.