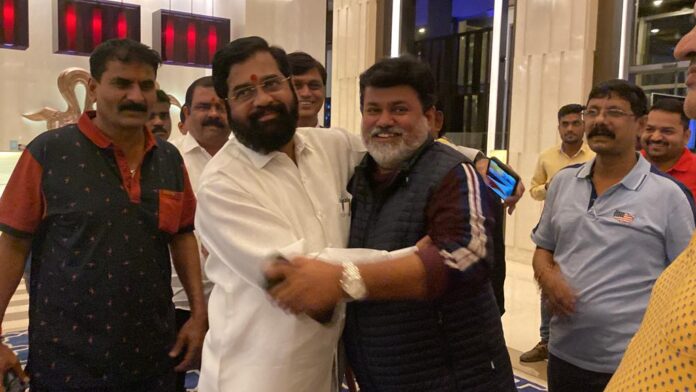 Mumbai (Maharashtra): Former minister and Shiv Sena MLA Deepak Kesarkar, who is now in the Eknath Shinde camp, said MLAs of the Shinde camp are ready to face the floor test in the Maharashtra Legislative Assembly at any time, but first recognition should be given to Eknath Shinde faction.

In an exclusive interview to ANI today over the phone, Kesarkar said, “MLAs of the Shinde camp are ready to face the floor test in the Maharashtra Legislative Assembly at any time, but first recognition should be given to Eknath Shinde faction. We will not go with the MVA government.” Amid the political crisis in Maharashtra triggered by a rebellion by a large section of Shiv Sena MLAs, who are currently camping in Assam, Maharashtra Minister Eknath Shinde has approached the Supreme Court against the disqualification notices issued by the Deputy Speaker against rebel MLAs. The plea also challenges the appointment of Ajay Chaudhary as the Shiv Sena’s legislative leader in the House in place of Shinde.

Kesarkar further said, “One to two more MLAs will come and join us. With their support and other independents, our strength will be increased to 51. We will arrive at a decision in 3-4 days and thereafter, we will directly go back to Maharashtra.”

Speaking at the ‘Shiv Sena Melava’ (party gathering) of workers at Sahisar in Mumbai, Raut went on to say, “40 bodies will arrive from Guwahati and they will be directly sent for post-mortem,” in a remark directed at the rebel Sena MLAs.

Reacting to this, Deepak said, “It is a very indecent statement. What kind of language has he used? He is a member of Parliament. By using such language, he is inciting the Shiv Sainiks. Our camp’s majority is increasing day by day.”

The political turbulence in Maharashtra was triggered by the faction war in Shiv Sena after Minister Eknath Shinde flew to Surat with some MLAs and then to Guwahati where he claims of having the support of 38 MLAs of the party, thus achieving the two-thirds majority in the Shiv Sena.