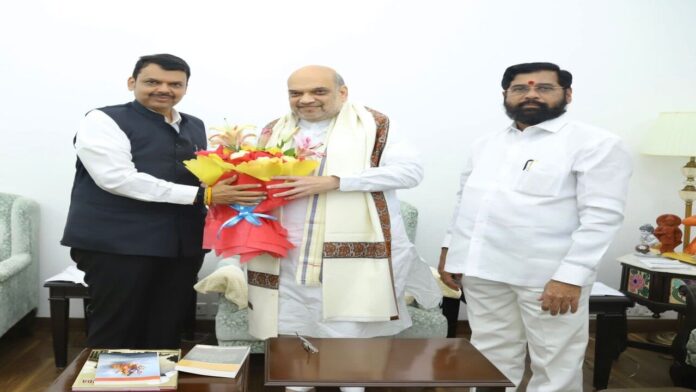 Discussions took place among the three leaders regarding the new government to be formed in Maharashtra and many other subjects.

“Newly appointed Chief Minister of Maharashtra Eknath Shinde and Deputy Chief Minister Devendra Fadnavis met him and wished him all the best. I believe, under the guidance of Narendra Modi ji, both of you will take Maharashtra to new heights of development by serving the people with full devotion,” Shah tweeted.

In Maharashtra, the Chief Minister and Deputy Chief Minister of the new government have been sworn in while the rest of the ministers are to be sworn in.

Sources said that more than a dozen people of Shinde camp can be made ministers.

Current eight ministers of the Uddhav government had joined his rebellion along with Shinde. In such a situation, all of them can be made ministers once again.

Eknath Shinde will be present in Delhi tomorrow, where he will meet President Ram Nath Kovind, Prime Minister Narendra Modi and BJP President JP Nadda. He will meet PM Modi in the evening while his meeting with the President is to be held in the morning.

Earlier in June this year, Eknath Shinde led a group of Sena MLAs against the MVA government, resulting in it losing its majority in the Maharashtra assembly. This also led Shiv Sena chief Thackeray to step down as CM ahead of a floor test.

The new Eknath Shinde-led government in Maharashtra won the floor test on Monday by a 164-99 margin, proving his government’s majority and cementing his position as chief minister of the state and the leader of the Shiv Sena.

The trust vote comes a day after BJP’s Rahul Narwekar was elected the Assembly Speaker.

On Sunday Narwekar reinstated Shinde as the Shiv Sena’s legislative party leader and also recognised the appointment of Gogawale as the chief whip of the Shiv Sena.

After the Maharashtra government won the trust vote in the state Assembly, Shiv Sena’s Eknath Shinde faction on Monday gave a petition to Assembly Speaker Rahul Narwekar for the suspension of 16 MLAs of the party belonging to Uddhav Thackeray’s camp for violation of whip.

The Speaker’s office confirmed that 16 MLAs will be issued notice for suspension. Gogawale had also issued a whip to the party MLAs to remain present in the Vidhan Sabha for the floor test.