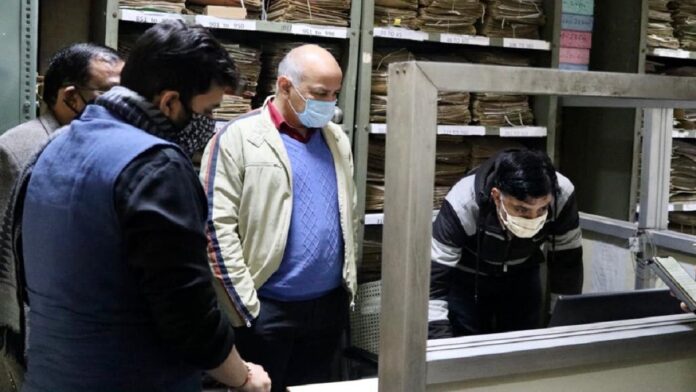 During the inspection, the Deputy Chief Minister found many irregularities in the official records. Taking prompt action, he directed the suspension of the four labour department officials with immediate effect. Along with this a supervisory officer was issued a show cause notice.

Deputy Chief Minister Manish Sisodia said, ”the Kejriwal government has a zero tolerance policy for any kind of corruption. Strict action will be taken against those who would try to deceive people, delay government works and mess up with government records.”

Sisodia also checked the records of the Claim Branch in the office, where he found several irregularities in the entry and dispatch registers. Many of the contact numbers of beneficiaries were also found wrong.

While checking the department files, the Deputy Chief Minister called on the phone numbers of the beneficiaries registered in the file and checked the status of the claim applications from them, here too many phone numbers were found to be wrong. On questioning this, no satisfactory answer was received from the officials present there.

Keeping this in view, he sacked four officials including the office manager, dealing assistant on the spot.

The Deputy Chief Minister directed the labour officers that all the work related to giving proper benefits to the workers through labour welfare schemes should be done on time. He instructed the officers that when the government has made welfare schemes for the construction workers, then all the eligible people should get the benefit of these. Any negligence in this will not be tolerated and the negligent officials will not be spared.

Sisodia also said that there are currently about 10 lakh registered construction workers in Delhi, and various benefits are being provided to them by the government to lead a better and dignified life.