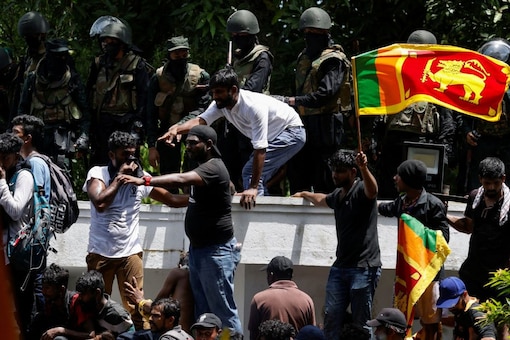 Colombo [Sri Lanka]: The Bar Association of Sri Lanka (BASL) on Wednesday asked the protesters to immediately return the office of the Prime Minister to the respective authorities saying ‘attempts to occupy Government Offices and to cause destruction or damage to property do not constitute peaceful protests’.

BASL while expressing distress over the actions of protestors who had gathered outside Sri Lanka PM’s office today and took over his residence at Flower Road here, said in a media statement, “The Bar Association of Sri Lanka (BASL) is deeply disturbed at the occupation of the Prime Minister’s Office at Flower Road by protesting crowds. We call upon them to return the said premises to the authorities immediately.” “Whilst the BASL will continue to uphold the rights of peaceful protests, it does not support a situation of lawlessness or anarchy which are unconstitutional,” it said, adding Attempts to occupy Government Offices and to cause destruction and or damage to property do not constitute peaceful protests.”

BASL further said that the country is in a fragile situation and it is necessary for the Speaker, Prime Minister and leaders of all political parties in Parliament, as well as the citizens, to act responsibly and with a sense of sacrifice in the best interests of the country.
“It is also incumbent on them to act in good faith and prevent the creation of a situation that could lead to the breakdown of the Rule of Law,” it added.

A large number of protestors today gathered outside the residence of the Sri Lankan Prime Minister and took over his office. Security personnel resorted to tear-gas shelling to drive away protestors on the streets of Colombo.

This comes after the embattled President Gotabaya Rajapaksa who escaped to the Maldives today appointed Prime Minister Ranil Wickremesinghe as the interim President of Sri Lanka.
Sri Lankan authorities confirmed that Gotabaya Rajapaksa had flown to the Maldives with his wife and two bodyguards after full approval of the country’s Defence Ministry. the Prime Minister’s Office confirmed that Gotabaya had landed at the Velana International Airport in Male on a Sri Lankan Air Force plane.

The crisis-hit island country’s Parliament Speaker Mahinda Yapa Abeywardena said that he is yet to receive a letter of resignation from Gotabaya. “We haven’t received President Gotabaya’s resignation yet, but we hope to get one in a day,” Abeywardena said.

Meanwhile, Wickremesinghe today declared an emergency and imposed a curfew in the western province of the country as protesters came prepared to face tear gas shelling by security forces deployed outside Wickremesinghe’s residence. Air patrolling also began around the PM’s residence.

On this, BASL said, “There were reports of the promulgation of a State of Emergency under the Public Security Ordinance and the imposition of curfew in the Western Province, which have been subsequently clarified as being ‘an intention to impose’ the same. After these reports, the Speaker announced that as President Gotabaya Rajapaksa had left the country he had appointed the Prime Minister as the Acting President under Article 37(1) of the Constitution.”

“These different communications have resulted in confusion and uncertainty among the members of the public,” it added further appealing to the people to remain calm and ensure peaceful protest and to ‘leave room for the peaceful transition of power which the political leaders of the country have promised’.

Sri Lanka’s Chief of Defence Staff General Shavendra Silva requested all citizens to give their support to the armed forces to maintain law and order in the crisis-ridden country.
Field Marshal Sarath Fonseka has appealed to security forces not to implement unconstitutional and unlawful orders given by the acting President Ranil Wickremesinghe.

He urged the armed forces, as a lawful and disciplined army, not to open fire at unarmed civilians and that their weapons should be directed against corrupt politicians.

73-year-old Gotabaya Rajapaksa had gone into hiding after crowds of protesters stormed his residence on July 9 and he had announced that he will resign on July 13.