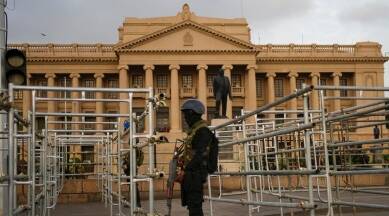 Colombo [Sri Lanka]: Sri Lanka’s parliament on Wednesday voted to approve the proclamation of the state of emergency imposed earlier in July, allowing it to extend it.

In the voting held today, 120 Sri Lankan parliamentarians voted for imposing emergency regulations and 63 voted against it. The state of emergency was declared by then-acting President Ranil Wickremesinghe with effect from July 18 under the Public Security Ordinance in the interests of public security, the protection of public order and the maintenance of supplies and services essential to the life of the community, Xinhua news agency reported.

According to the legal provisions, if the approval of the parliament is not obtained within 14 days of the said proclamation, it shall expire.

Wickremesinghe was elected to be the president of the South Asian country in a parliamentary vote on July 20 and was sworn in a day after.

He was elected as the new Sri Lankan President after 73-year-old Gotabaya Rajapaksa had gone into hiding after crowds of protesters stormed his residence on July 9.

Sri Lanka has been suffering a diesel shortage since February, which led to hours of daily power cuts. Presently, Sri Lanka is struggling with acute food and electricity shortages, forcing the country to seek help from its neighbours.

The recession is attributed to foreign exchange shortages caused by a clampdown on tourism during the COVID-19 pandemic. The country is unable to buy sufficient fuel and gas, while people are deprived of basic amenities as well.

On Wednesday, media reports said Gotabaya Rajapaksa has extended his stay in Singapore for another 14 days.

Rajapaksa was issued a 14-day visit pass when he arrived at the Changi Airport in Singapore from the Maldives on July 14. His pass to the city-state will now expire on August 11, the Straits Times reported on Wednesday.

Sri Lanka’s cabinet spokesman Bandula Gunawardena said on Tuesday at a press conference in Colombo that Rajapaksa is expected to return to the country from Singapore.
The former president who sledged the nation initially stayed at a hotel in the city centre but is believed to have moved to a private residence, strait times reported.

Singapore’s Ministry of Foreign Affairs said on July 14 that Rajapaksa had not asked for asylum and neither had he been granted any asylum.